▶ About Us ▶ Ripon Grammar School in the community

Ripon Grammar School in the community Ripon Grammar School staff, students and their families have enjoyed being part of the local Ripon community for over 450 years, with families attending the school through many generations of ‘Old Riponians’.

Staff and students are proud to play their part in local life, in education, where teachers offer support to local primary schools throughout the year, and in the wider community. A number of our governors also give their time to the governing bodies of other local schools.

Teachers work with thirteen schools in the local area. The science and design technology departments work with a different primary school each half-term, taking weekly science or design technology lessons for a 5-6 week period. They work with younger students at their primary school, or where possible the pupils come into Ripon Grammar School, introducing them to age-appropriate topics, including Astronomy, chemical reactions and gases. The scheme also helps with their transition, as those students who go on to join the Grammar School are already familiar with some of our teachers.

Ripon Grammar School boasts a busy and vibrant music department and it enjoys an active role in the local community. Our choirs and ensembles feature in concerts and competitions throughout the year. Our most recent engagements have taken us to Ripon Cathedral, Ripon Racecourse, Ripon Hospital and several care homes near to the school. Many of our students have busy music schedules outside of school. Amongst them are Cathedral Choristers, members of the Tewit and Ripon Brass Band, County Youth Orchestras and Choirs and The National Youth Choir of Great Britain. 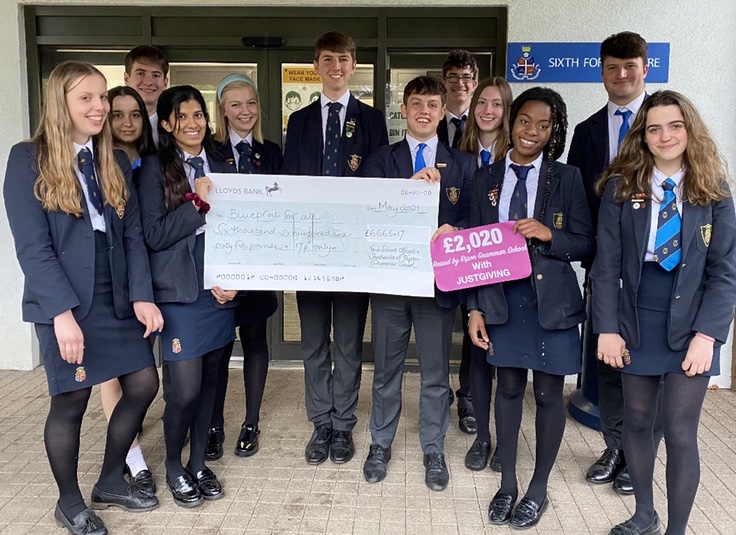 Our sixth form students are actively involved in raising money and awareness for worthy causes. Charity week is an annual, whole-school event where students in sixth form choose a charity and organise a wide range of events to raise money for the chosen organisation.

IN 2020/21, creative Ripon Grammar School students touched by the tragic death of a London teenager came up with a series of innovative fundraising ideas to raise an impressive £8,685 for charity during an extremely challenging year. They were determined lockdowns and social distancing rules wouldn't stop them from collecting as much as they could in support of the charity Blueprint for All, set up in memory of teenager Stephen Lawrence, who was murdered in an unprovoked racist attack.

Although they couldn’t hold the usual whole school Charity Week events such as music concerts, staff pantomimes, comedy performances and dance competitions, student leaders encouraged the whole school to get behind a new way of fundraising throughout the school year. Blueprint for All chief executive Sonia Watson praised students for achieving something truly remarkable: "Everybody at RGS should be incredibly proud of this outstanding achievement and for providing educational insight on racism."

Head girl Molly Cushing explained: “This year was the first time we haven't been able to do a normal Charity Week, so we had to be especially creative and adaptable to organise plenty of events to bring the school together behind this great cause while still sticking to all the guidelines.” The fundraising team organised non-uniform days, a sponsored Everest stair climb and a Christmas raffle, as well as sponsored walks and reads, raising £6,665 in cash donations in addition to a further £2,020 on the Justgiving online donation platform.

“We are so pleased that the whole school got behind our fundraising effort to raise such a brilliant amount for Blueprint for All given the unusual circumstances of this year,” said Molly. The school officers also used their fundraising campaign to provide educational insight into racism and the valuable work their chosen charity does.

Ms Watson added: "Through difficult circumstances, Ripon Grammar School students have managed to power through and achieve something truly remarkable. I am particularly impressed with the range of creative activities they have undertaken, despite the cancellation of regular charity-focused events throughout the year.

"We want to thank you for shining a light on the important work we do at Blueprint for All for young people and the communities they live in. Thank you for your incredible support." 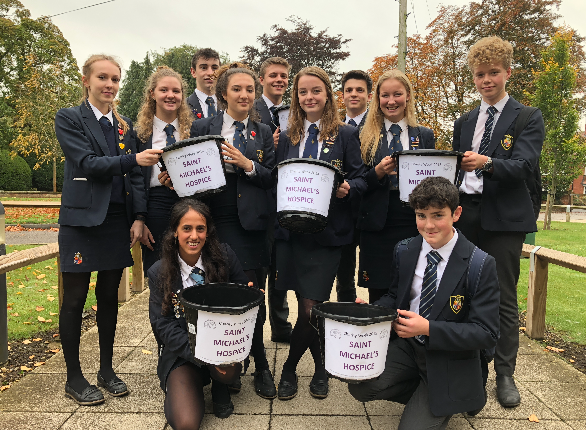 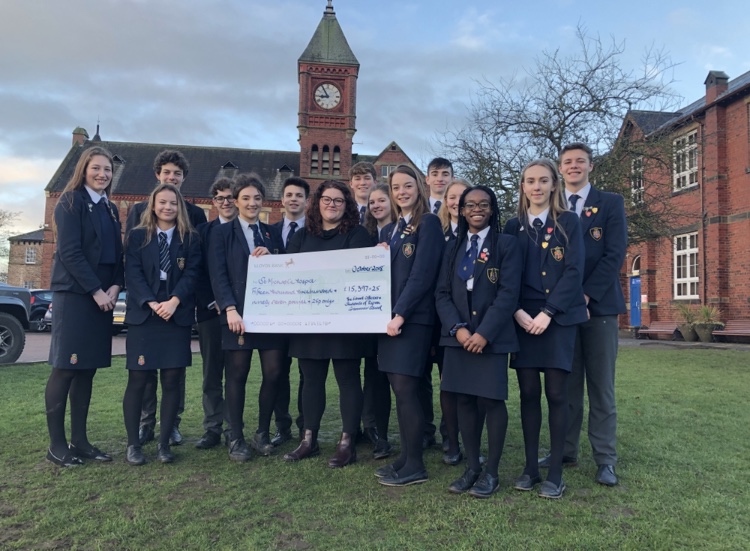 IN 2019/20, students raised an impressive £11,496 to help protect our oceans and improve our coastal environment.

Environmental campaigning pupils threw themselves into a series of fundraising events to raise the huge amount for the marine conservation charity Surfers Against Sewage, whose number one priority is tackling plastic pollution. As well as organising sponsored beach litter pickings, the sixth form students leading the campaign reached out to local primary schools to share ideas on helping the environment in order to make a difference within their local community.

Most of the money was raised through popular events, including a teachers’ pantomime, inflatable Sumo wrestling and bungee runs, and a Strictly Come Dancing contest. There were also sponsored pyjama swims, film nights and cake stalls. 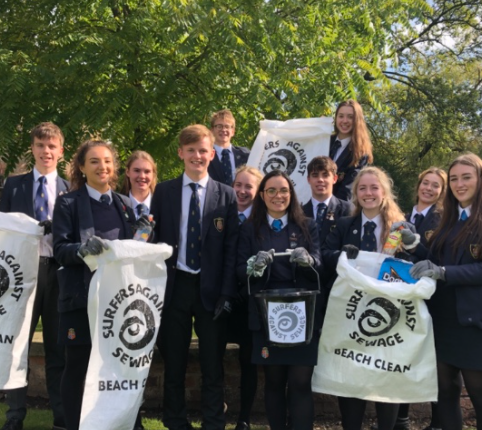 SAS Campaigns is the first environmental charity students chose to raise money for during the school’s annual Charity Week. In keeping with the fundraising theme, students were encouraged to reduce waste and go plastic-free for the week. Sebastian Lyons, a member of the school’s eco-committee, came up with the idea: “I believe we need a fundamental change in how we view the environment and SAS is at the forefront of this.”

In 2018/9, students raised a record-breaking £15,397. The fundraising drive was led by two inspirational students who lost their fathers to cancer has raised the money for the local hospice which cared for both men while also supporting their families.

Other charities which have benefited from RGS student fundraising include the Yorkshire Air Ambulance, 'Brace' a charity supporting Alzheimer's sufferers in the community, In the summer of 2014, Jenny Unwin, an active fifth year student was knocked off her bike in a horrific accident on her way home from her part-time job. The accident has left her paralysed from the chest down and means she uses a wheelchair to manoeuvre around. The appeal, set up by her friends, is raising money to enable her to buy equipment so she can have a full and active life again. The appeal has been supported by the school and wider community, through fund-raising events including a non-school uniform day, music days, sports days and sky-dives.

Every Wednesday afternoon, students have an option to volunteer to participate in supporting our local community. Many students spend time in local primary schools, where they read with younger pupils, in nurseries, residential care homes, helping out at St Michael’s Hospice charity shop in Ripon and at Jenny Ruth (a workshop for people with disabilities). 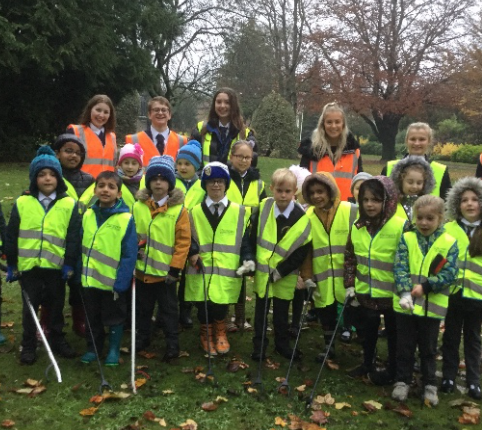 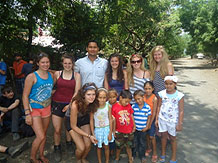 Once every two years a large group of upper school students participate in an extended overseas visit to an exciting destination. The trip involves three stages, a trek and exploring stage, a relaxation stage and a project phase. The project phase involves the group helping set up a new venture, for example in 2014 the group went to Pablo Antonio Cuadra, a school in Granada, Nicaragua. Many of the pupils are from poor backgrounds and the school lacks the necessary funding. The group painted window bars and a newly constructed wall that they had funded. They also repaired the fence around the school, creating a safer environment for the children. The group also did some teaching. The project was extremely rewarding for the whole group and it truly is an experience they will never forget. The next planned trip is due to depart in July 2016 to Borneo and Malaysia and the group are well underway with fund-raising for the expedition.

There is an active Duke of Edinburgh group at Ripon Grammar school. As part of the award the students have to complete a minimum of 3 months voluntary work. Many of our students help out at guides and scouts, as leaders working with younger children in the local community. Others are involved in helping out at local events for example the Park Run on a Saturday morning at Fountains Abbey. Students are also involved in helping to coach football with local teams and some students work voluntarily in local charity shops. This year students have helped the local Oxfam shop by designing and making window displays.

Property that has been unclaimed during the school year is given to Scope Charity shop in Ripon to support local people with disabilities.