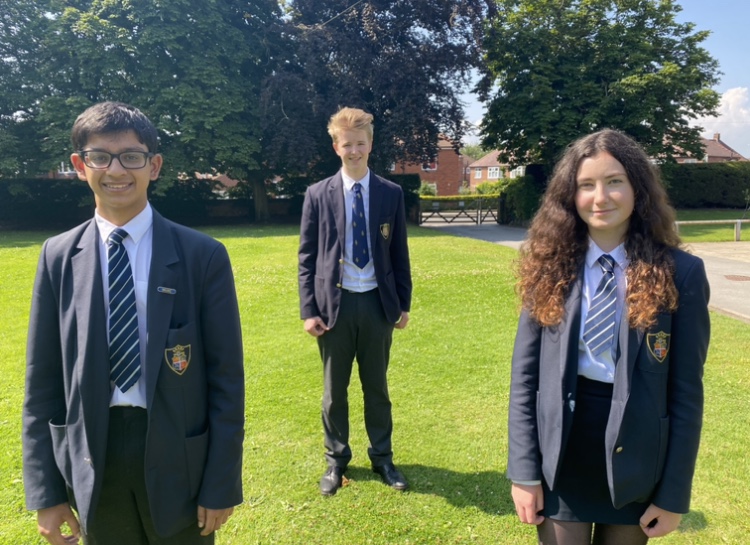 THREE Ripon Grammar School students have been honoured at an online ceremony to celebrate the work of exceptional young scientists..

Samarth Dasarathi, Millie Dean and Henry Bushell were among young people from schools across Yorkshire recognised as outstanding students at the University of York and Ogden Trust seventh annual Physicist of the Year awards.

The trio were nominated by their teachers, who selected pupils based on their hard work, contributions in class and progress over the past year.

Millie, who aims to work in bioengineering or aeronautical engineering, won the award for her academic progress as well as her determination to go above and beyond that required for GCSE by answering questions from A-level textbooks.

The 15-year-old, from near Ripon, said she was delighted to receive the award, which was followed by a fascinating talk on radio astronomy: “I enjoy the practical aspects of physics and how physics relates to all particles and objects’ movements, in both Space and on Earth.”

Samarth, from Burton Leonard, who aims to become a mechanical engineer, was praised for his academic performance, combined with his enthusiasm and probing questions designed to elicit his understanding.

He said he was inspired to study astronomy after watching a Discovery Channel programme on the Universe: “I love the force and motion-based aspects of physics but also the weirder and stranger aspects like special relativity and quantum physics.

Henry, studying physics, economics and maths at A-level, was rewarded for his outstanding academic performance, combined with his enthusiasm, positive attitude and willingness to help others.

The 17-year-old, from Richmond, said he was inspired to take physics further after reading Stephen Hawking’s A Brief History of Time: “While I didn't quite understand it all it made me want to be able to understand it! I'd recommend any student who is on the fence about studying physics or hasn't considered studying physics to really consider it, while it is a difficult subject you do get a lot out of it once you put the work in.

“I enjoy physics as it is naturally interesting because it describes the natural world around us; my favourite topics so far have been quantum physics and the Space topic which I am currently studying, which provide new frameworks with which to view the world.”