From A&E to World Championships podium 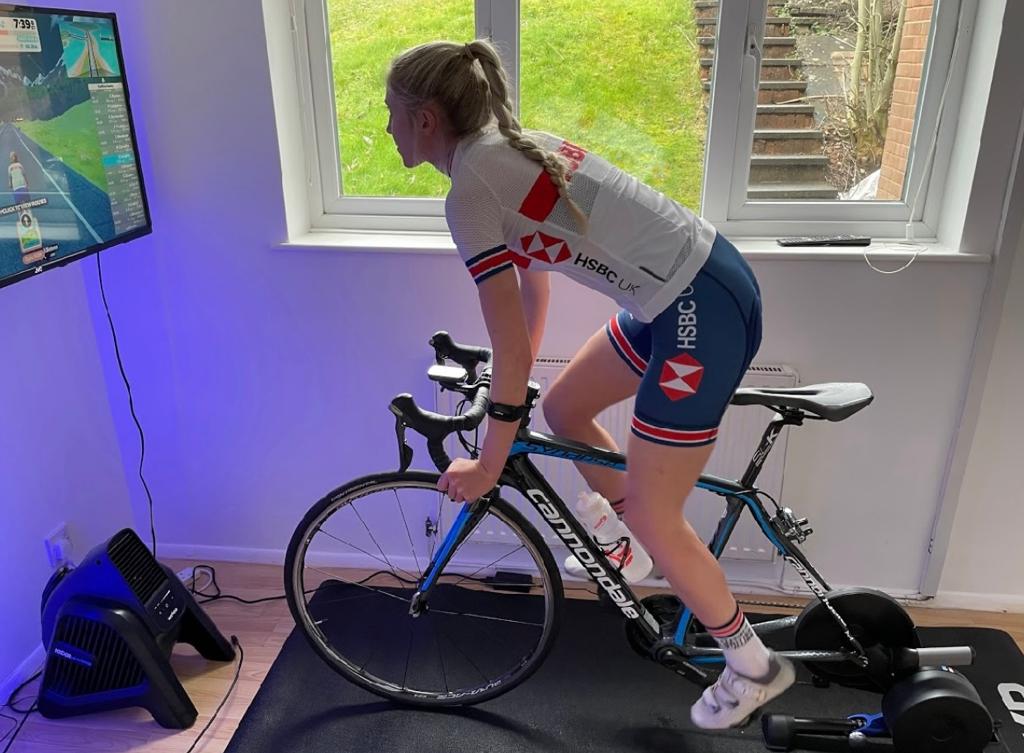 On Friday, trainee doctor Zoe Langham was working in A&E. The next day, she won bronze for Team GB in the UCI Cycling E-sports World Championships – in between preparing for her final medical exams, just two weeks away 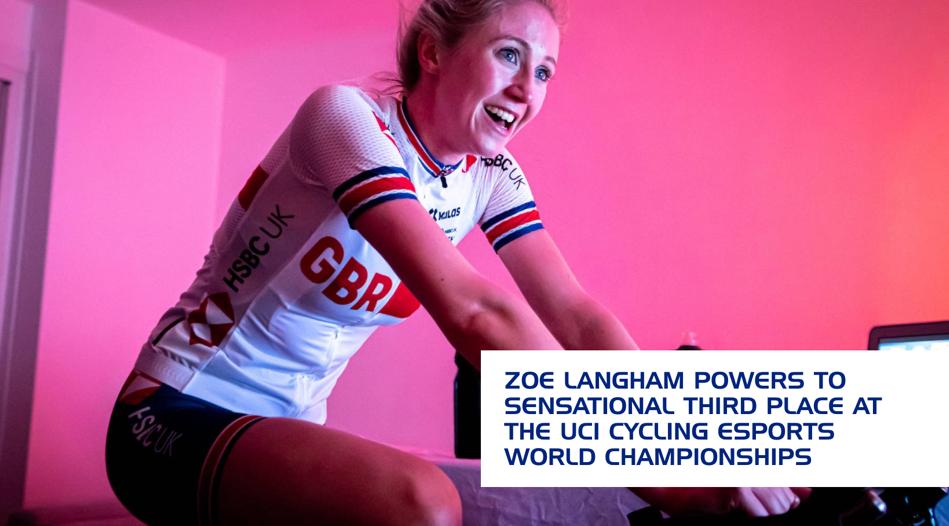 Zoe, who left RGS in 2017, confesses she cried when her father took her on a 70-mile bike ride as a teenager. But she stuck with it, juggling working in the NHS throughout the pandemic with her punishing training schedule to compete on a world stage 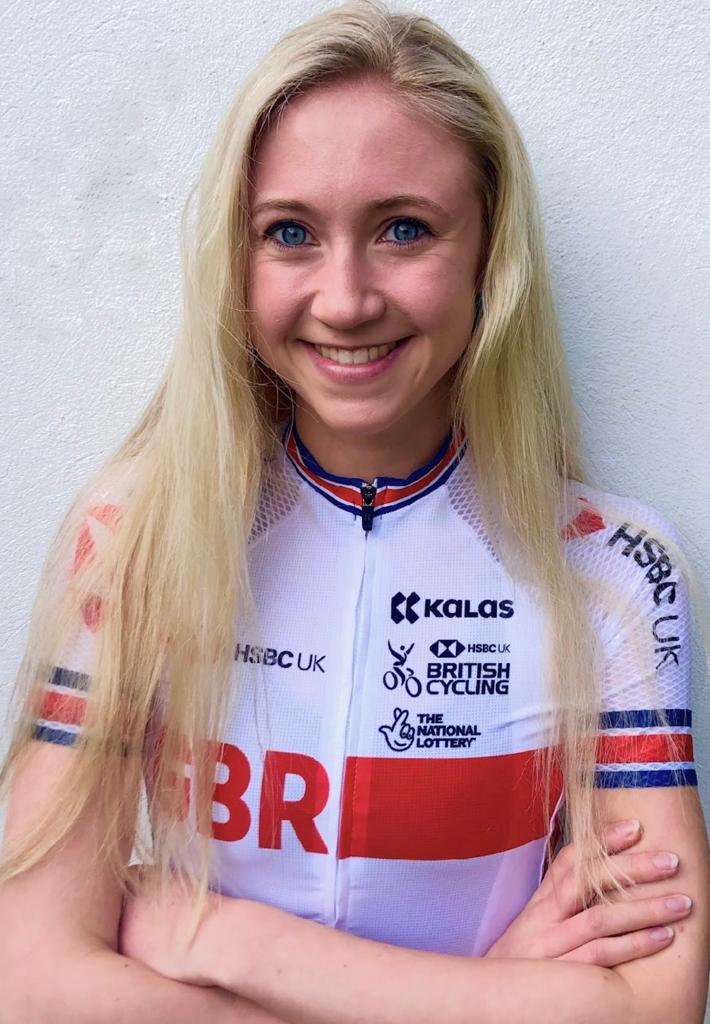 The 23-year-old, from Thornborough, outside Ripon, is studying medicine at the University of Nottingham, having taken history, chemistry, and biology at A-level at RGS.

The day after the race, as her tremendous achievement was still sinking in, Zoe told us: "It's unbelievable to come up against some of the best and still compete with them.

"Just to be on that start line was a huge achievement and I couldn't be prouder. I have a lot of people to thank for getting me there and the amount of support I had yesterday evening was phenomenal and heartwarming.

"It's not every day you get to don the Team GB jersey and I hope I did everyone proud."

*E-cycling is a new and exciting discipline, increasingly popular since indoor cycle training and e-racing has become absorbed into the year-long cycling season

Q: When did you first start cycling and what attracted you to the sport?

A: My dad took me on a 70-mile bike ride aged 14 (which I actually cried on) and, surprisingly, I never really looked back! But it took me until I joined university to start cycling regularly.

Q: How do you juggle professional cycling with your studies?

A: I wouldn’t say I was professional, Strava (the exercise activity app for athletes) turned my account professional (very generous of them!) perhaps to further their recognition of e-sports performance at the highest level. Either way I’m still studying, I have my medical finals to sit in two weeks’ time, so things are quite busy!

It’s not been an easy juggle, especially with the significant strains of Covid on my NHS placement, but I’m still here! In a way the cycling has given me something else to focus on which isn’t medicine and that is vital now even more than ever.

Q: Can you outline a typical day?

A: Usually, I will be up early to commute to a hospital or GP surgery where I will be most of the day seeing patients or scrubbing up to assist in theatres. Later I will have cycle training set from High North performance, if I can get outside that’s great but if the light has gone this will be on the turbo. Usually by then it’s time for dinner and a catch up with my housemates!

After my last day at Lincoln Hospital on Friday, when I finished my medical school placement, I had to pack everything up from living there and drive down to Birmingham on Friday night, then lots of setting up and checking equipment as well as sitting in briefing meetings and having my photo taken for British Cycling before the race!

Q: What are your ambitions for your cycling?

A: I cycle for Wahoo Le Col and have hopes to go into a road team next year if I can cut down my foundation doctor training to less than full-time. If that’s not possible then I will have to choose between taking a few years off and just cycling or pursuing a medical career - not an easy decision to have to make.

I would definitely like to take it further and go on to race abroad if given the chance, but It would mean leaving medicine, as you have to have completed your junior doctor foundation training within a couple of years of graduating. 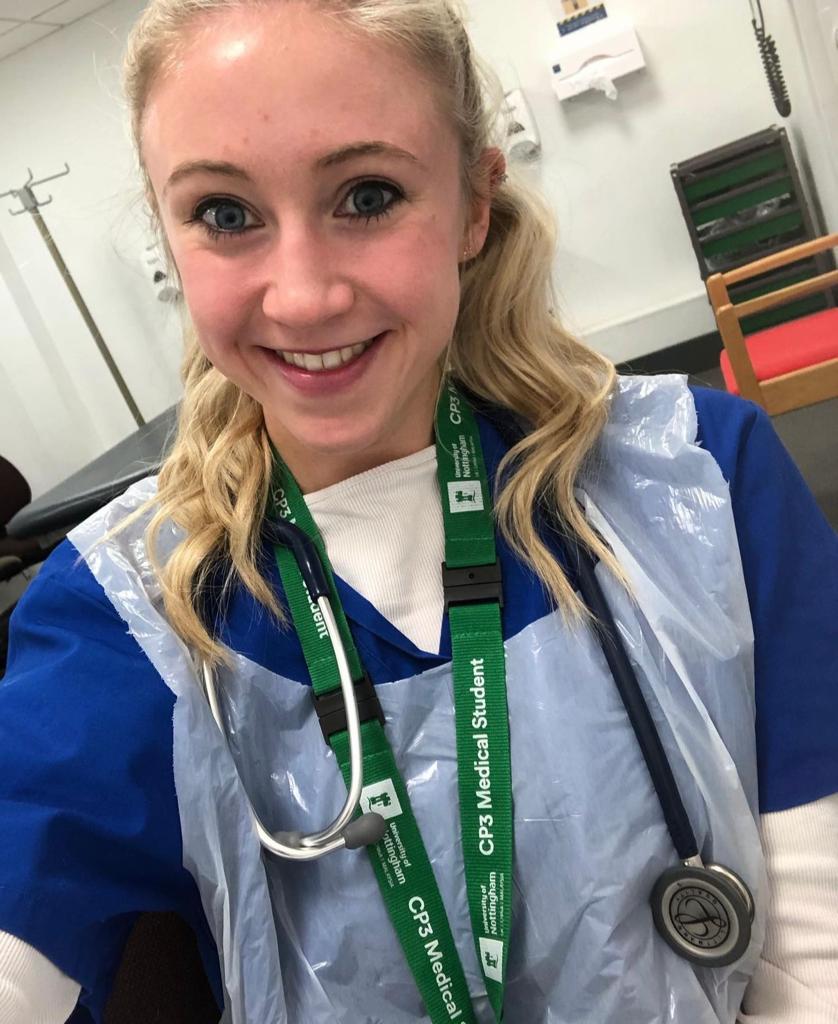 Q: When did you start e-cycling and why?

A: Only really the last 18 months. It was something I could be competitive in while working around my hospital placement hours. Having a turbo trainer has allowed me to get in more than hours a day on the bike despite not finishing until it’s dark outside. It’s also very inclusive, you don’t need the best bike or most expensive kit to be competitive and that’s what I love about it, especially being a student… affording an expensive bike isn’t easy!

Considering that a lot of high-profile cyclists have been hit by cars recently, it’s also come into its own as a much safer version. That said, I still love riding outside when I can!

Q: Who or what has inspired you?

A: There are a lot of female cyclists who I look up to and who have paved the way for Paris Roubaix Femmes/Le Tour Femmes but the people who inspire me every day are actually my family and friends. I’m extremely fortunate to have such a supportive network around me to allow me to do what I do each day.

Q: Can you explain, for those who don’t know, exactly what e-cycling is and how competitions work?

A: It is essentially just using turbo trainers that can read watts/the power you are putting through the pedals combined with your weight and height to calculate how fast you would be up certain gradients to allow you to race virtually. There can be a lot of issues with this in terms of 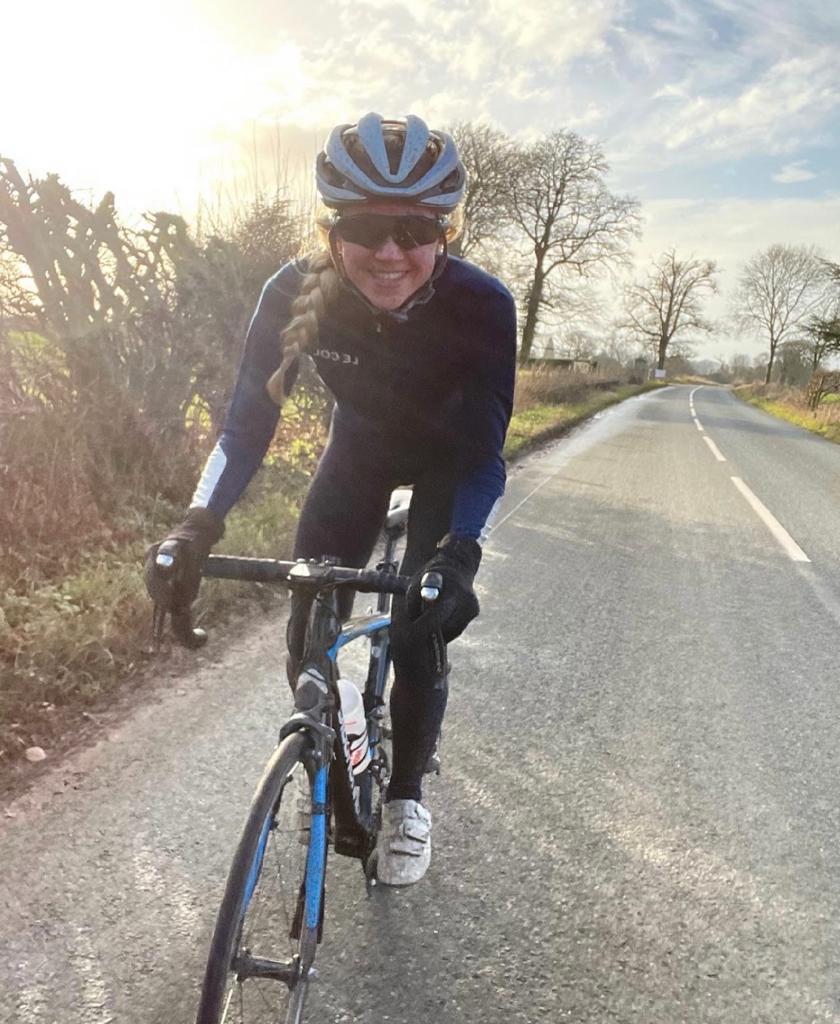 less accurate turbo trainers and ‘weight doping’ but at the top level it’s tightly regulated. I’m only allowed to ride a specific top-spec turbo that has been sent to me for racing purposes only, I also have to provide a dual recording for every race from my pedals using a dual-sided power meter and these must match. Every time I race, I have to send in a weigh-in video and height video filmed by another person within two hours of the race start. These have lot of steps such as calibrating the scales with 10kg weights. For the World Championships I have also had to go through a lot of pre-race verification, proving I can perform certain powers both indoor and outdoor and pass my drugs test as per the UCI anti-doping regulations.

Q: How much time do you spend training for your sport and how regularly do you take part in competitions?

A: I only do about 13 hours of cycling per week now - for a cyclist that’s quite low! In the summer this will go up to around 17 hours but juggling placement and final exams has meant I have to be careful not to burn out. How much I will race depends on the season, but usually it’s weekly in season.

In physical races, I’ve done a lot of hill climbing over the past year and am due to start doing more lapped closed circuit and road races as soon as my exams are over and I have more time to race during the day. 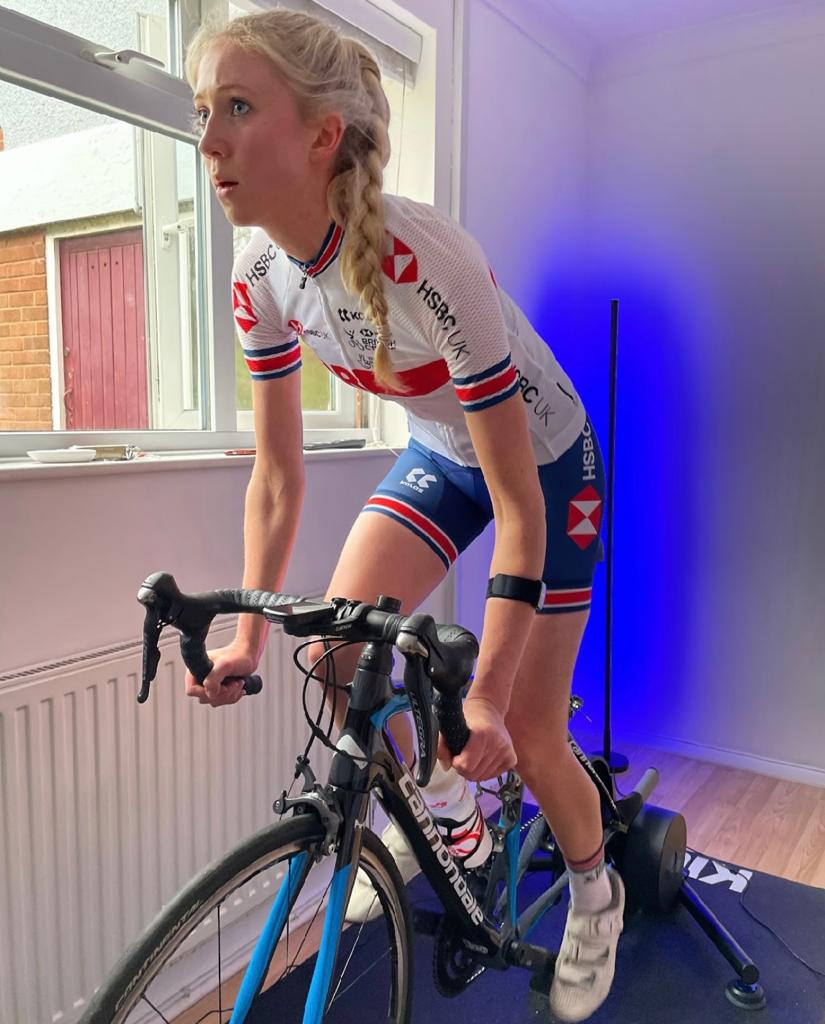 Q: What have been the biggest challenges you’ve faced?

A: Probably my lack of self-belief. Missed rotations due to multiple house covid isolations, combined with fewer teaching opportunities as the NHS has been so strained has meant it’s easy to doubt your abilities and if you are ready. The reality is that just by still being there you are good enough and you are capable, I have to remind myself daily how far I’ve come!

Q: How has the pandemic affected you?

A: Training in the NHS throughout the pandemic has been very mentally draining and some days can be scary 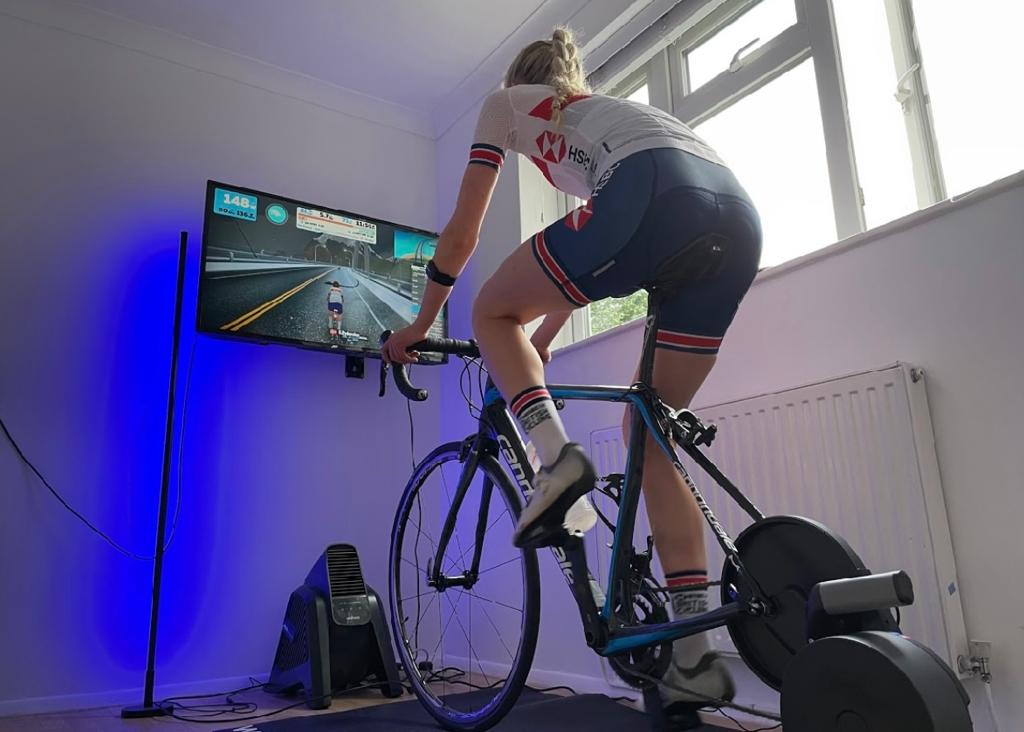 . That said, it hasn’t been an easy period for anyone, and generally people are extremely understanding and thankful!

Q: What was the most important lesson you learnt at RGS?

A: To do what makes you happy. Sometimes I think it is easy, especially at a school as high achieving as RGS, to think you have to keep being the best at everything. You don’t, and your happiness is worth so much more than any wage or letters in front of your name.

A: That you don’t have to know the path you want to follow when you leave school or even when you leave university. Take each year as it comes and take breaks where you need. There isn’t a rush to be at the top of any career path, you have your whole life to do that.

A: Make sure it’s absolutely what you want to do. It is an amazing profession and a real pleasure to be a part of but don’t do it half-heartedly. It’s not glamorous and the hours aren’t sociable for a junior but seeing people at their most vulnerable is an honour and a reminder every day of how lucky you are to be healthy.

Also, I would really encourage any student going on to university to really give new societies a go - you honestly never know what you can find you are good at or enjoy and it really worked out for me.

A: There are many I could list for various reasons, I have so much to thank RGS for where I am now. Some of the best were the ones who were honest about life after school as you try and make your way in the world as an adult. I think I got more life lessons from Mr Bob than IT training!

Q: What extra-curricular activities were you involved in while at RGS, both in and out of school?

A: I was involved with house drama, and most of the sports at some point, but being one of the school officers and all the extra-curricular organisation that came with that was my favourite bit. I still keep in close contact with the other deputies/heads today!

Q: What was your dream when you were at school?

A: I wanted to be a doctor in obstetrics delivering babies each day!

Q: What are your hopes for the future?

A: To be happy in whatever line I end up in, be that cycling or staying in medicine. I think sometimes we forget we work to live, not live to work.

Q: What would you say has been your greatest success?

A: My greatest success has to be graduating (hopefully!) despite training during the pandemic. I’m proud of what I have got through in the past 18 months and for what I have been a part of.