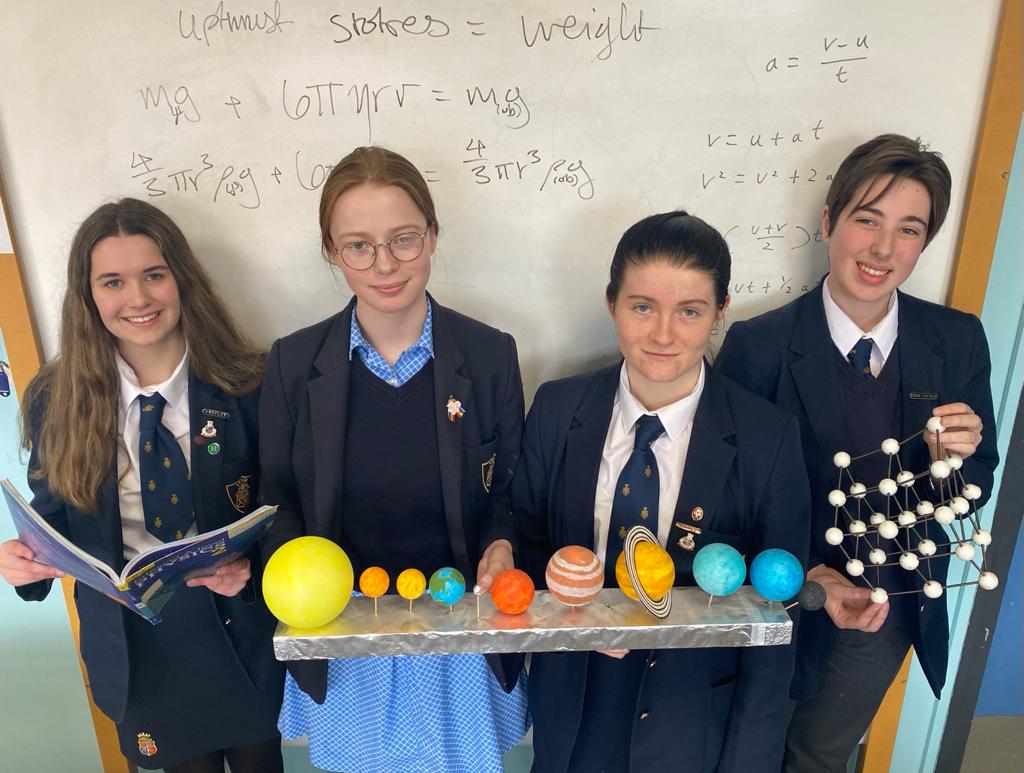 Controversial head teacher Katharine Birbalsingh, who chairs the Social Mobility Commission, found herself in the eye of the storm when she told the Commons science and technology select committee that one of the reasons why fewer girls study physics might be their reluctance to do the ‘hard maths’ the subject requires. We asked five female RGS A-level physics students for their views 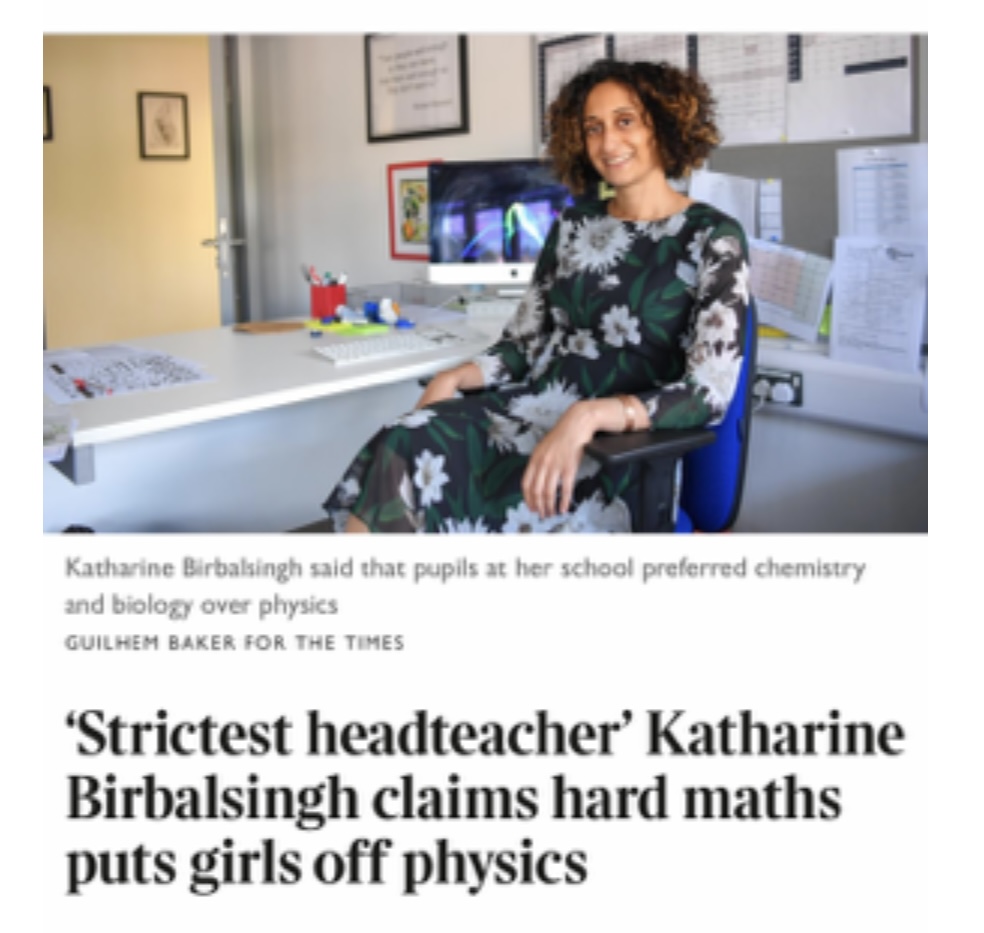 “I genuinely don’t know why physics is so male dominated, of course historically it has been dominated by men, which is hard to forget when almost every physicist we learn about is male, but there have been leaps and strides in recent years to get girls into physics especially by the Institute of Physics, which has made a huge change.

Taking physics A-level was a logical step for me as I’ve always wanted to study astrophysics; I’ve been fascinated by space my whole life. I would read books on pretty much any aspect of space from the Big Bang to the Big Crunch, oceans on distant moon to time dilation.

“I feel the easiest part of physics is the maths! The theory is where it gets difficult, but that just makes me more determined to learn and not give up! Doing A-Level maths helps, but most of the maths involved is using equations which doesn’t involve too much thought. Most of the maths content is GCSE level so there's definitely no reason why girls would be put off by the ‘hard maths’.

I would say to other girls considering physics - go for it! If you enjoy the subject, you will enjoy A-Level physics as you get a much deeper insight into the subject than at GCSE, and it helps describe the workings of the Universe around us! The subject also offers a huge range of career paths, which often overlap with other subjects such a chemistry, maths and engineering.

I find the space and particle physics topics the most enjoyable as the theoretical aspect is nothing like any other branch of physics and gives a completely new viewpoint to the world. They allow the ideas we've learnt all our lives to be questioned and demonstrate new paths of thinking which seem to make no sense, but then as your knowledge grows you feel everything start to click!

Physics still has some way to come to achieve equality, but I believe everyone should have an equal opportunity to study the subjects they enjoy.

“I honestly don't fully understand the reasoning behind this I personally was never put off doing physics by the maths involved, as a lot of the subjects I wanted to take already included maths at some level, and I most certainly don't understand why it is assumed a girl would be put off maths more than a boy.


Anyone, no matter what gender, can struggle with maths, especially when it's applied to scenarios with multiple steps involved, but if you keep practising the questions until you know the right steps to take, it's quite manageable, there's genuinely nothing to panic about.


If you want to, then do it! I can't think of any reason why any other girls shouldn't take physics, it's so interesting and the range of the topics is phenomenal.

I have always loved how physics ties into the wider world and how it can be seen in everyday scenarios, I originally studied it with the idea of becoming an engineer or designer but found that these skills could also be applied to computer simulations as well.


As I've said, I love how wide the range of topics you cover are, and how you can notice it in everyday situations, it really does make you look at the world in a different way.


In the past science was always dominated by men, with women rarely having access to the required equipment to conduct experiments, or a suitable platform to share hypothesises, something which, while mindsets have on the whole changed, can still be seen with the drastic difference in the number of boys studying physics in comparison to the number of girls.

I believe that if girls (and equally boys) are encouraged, and not pressured just for the sake of numbers, into studying physics, by being shown all you are capable of learning, then we will be on the right path to seeing more equal numbers of students taking on the subject.

Sophie Pointon, 17, is studying physics, maths, chemistry and Spanish at A-level and plans to study engineering at university

I wanted to study physics because it gives me more options at degree level and I enjoy being able to see physics at work in the everyday after learning about it in class. Everything is physics.

I think the argument that the hard maths puts girls off (rather than boys!!!!) is baseless. I think the reason it’s a male-dominated subject is for historical reasons and to do with stereotypes.

The maths part of physics pales in comparison with the knowledge you have to bring to the ‘level of response’ questions. The papers challenge you to think and use what you know overall, while the calculations ask you to use formula into which you just plug numbers (and the formulae are given to you).

I find the maths very manageable, it's the part of the course I worry about the least, to be honest. If there is a hard maths-related topic, I make sure I understand the concept behind it by going over it again.

I would say, don’t be put off because females are in a minority in Physics. It's a very useful subject and if you want to do it, and you're good enough, you should definitely do it, no question.

It's a good thing to encourage more girls to do STEM subjects, but why shouldn't boys be encouraged to subjects where the gender split is the other way, like in languages, English literature, biology, art, and RE?

If we're going to aim for a truly equal society, all subjects should have a nearly 50/50 split, not just the STEM ones. (It is very binary referring to just boys and girls, but I sort of understand why in situations like these)

Grace Stroer- Jarvis, 18, is studying chemistry, maths and physics at A-level and plans to study nuclear or chemical physics at university

I decided to study physics because I’m good at it and I like maths. I don’t think this assertion about girls and ‘hard maths’ is founded in anything.

I would advise, if you're going to take A-Level physics take A-Level maths, it helps with your overall understanding of where equations come from- especially when doing log graphs or mechanics.

There's a lot of pressure on women in STEM to justify why they're the subject they're in by being the best or by being respected by their male peers.

You don't have to be better than everyone else to be worthy of pursuing 'hard' science. Enjoying it is enough, and more important than just being clever.

I think it's important for girls who are considering STEM in general, not just physics, to know that you don't owe anyone an explanation, least of all any men who look down on you.

One of the reasons it may be a male dominated subject is probably the blatant sexism in STEM academia and a limited number of female role models. It's not really a favourable working environment and if you're not passionate about physics it can be pretty disheartening.

It might be true that more girls study chemistry and biology at undergraduate level but the number of women who pursue and are accepted into post-grad courses and jobs is significantly less. You don't really have to look very far into the world of STEM at university to feel vastly outnumbered by a plethora of mediocre men.

Ellen McKeag, 18, is studying economics, chemistry, maths and physics and plans to take a gap year after RGS

“I wanted to study physics because I thought it was one of the most important subjects out there and that I should learn as much as I could about it.

I don’t think the argument about girls and hard maths is valid. When I chose physics I didn't even consider the maths part of it.

I find the maths of physics the easiest part. I do A-level maths and this covers most of the elements of maths in physics anyway. The most difficult part in physics is the theory.

I would advise girls, if you want to study physics, study it. Don't worry about the statistics of who already does it and don't let it influence your decision. If you're passionate about it and are prepared to work hard, then go for it. And I would say the same to any boys considering it.

I enjoy the theoretical parts of physics the most, particle physics, astrophysics. Everything that we don't understand yet fascinates me.

I think it’s a male-dominated subject probably because historically it always has been, like most other science subjects, and unfortunately old archaic views and ideas are hard to change.

I think girls shouldn't be encouraged into physics just because they're girls, everyone should be encouraged equally. Perceptions of who studies what types of subjects should be changed, there should be no 'boy subjects' and 'girl subjects'. And I hope this will change.