▶ News ▶ Memories of an adventurous expedition

Memories of an adventurous expedition

DANNY COSTELLO recalls the RGS geography department's trip to Iceland back in 1962, although sadly has no photographic record*

It was the head of geography, Mr Sean Crawford, who made the proposal and he seconded Mr K Locke, assistant geography master, to provide the necessary second in command.

THE PLANNING AND PREPARATION

All members of the party were allocated tasks. In particular Black made a good secretary and found financial sponsorship as well as expedition packed food for the whole three-week trip, showing how well suited he was for his future distinguished career in the Army. Mr Locke used his position in the CCF to borrow the necessary camping equipment from the Army.

The only means of travel available was by the good ship S.S.Gullfoss from Leith, Edinburgh, return, two to three days each way. Each member was then asked to make their own way to and from Leith and then the boat passage cost £29.50 return.

This vessel was the packet boat which operated between Copenhagen-Leith­-Reykjavik return, and was used largely by Icelanders making shopping trips to Edinburgh. Our accommodation was third class and very basic, but our meals were with the second class passengers and were typical Scandanavian Skormersborg - a choice of 50 dishes, serve yourself! We were also allowed in the second class bar at the stern of the boat which proved a very sociable place to observe the North Atlantic sky in the summer, in the company of very generous Icelanders. On a personal note this was where I received a 'ship to shore telegram' from my father confirming my university place at Bristol.

LOGISTICS OF TRAVEL IN ICELAND

We arrived in Reykjavik and transferred our gear and selves onto a15-seater four-wheel-drive bus which headed across the 'moonscape' on the dirt road for 60miles in a northeasterly direction.  We were dropped at the roadside at a suitable place for our first camp, and the transport left us.

We realised then that we couldn't carry all the equipment in one journey so used base camp for a few days for local exploration. The first move of our return towards Reykjavik was an eight-mile return haulage trip with an equipment load to a second base. This was across the 'moonscape' but very tough going. Also we found that streams in the morning changed totorrents of meltwater by the afternoon. So we had to plan our daily excursions around this.

We roped together and fixed crampons to our boots to make an extensive trek over a glacier from its snout to its origin. The danger of the fissures could be measured by the time a tinkling lump of ice took to reach the bottom.

The volcanic landscape could be observed because there was very little cover of topsoil. Different types of volcanoes, from eruptive to evusive, could be traced.

Rivers made short work of the landscape. The volcanic rock tended to have seams of ash deposits, and the rock itself was lightweight, which all made erosion an active process with the enhanced meltwaterr flow each afternoon. One such gorge was seen at Gullfoss (hence the name of the package boat), where a large waterfall discharges into a gorge similar to Niagara.

Following our trek over the glacier we had a two-hour overland hike back to camp. The weather was hot and sunny and I made an offer of 10/-(50p) to the first in the lake at camp for a swim. Now the lake was formed by the glacier and there were icebergs floating near the shore. Also hidden in the water were some sizable boulders. I was paddling among these with a view to defend my 10/-, when I heard a scuffle behind me. It was Mr Locke in full sprint towards the lake. He tripped on a boulder but I believe he came out quicker than he went in! He was the only one to swim and won the money.

As we approached the village of Geysir, which is the settlement where the hot springs are, member Robert Heaton dipped his drinking mug in a stream but was surprised to be scolded when he took a drink. However, we all benefitted from the swimming pool heated from the springs having our first hot bath for a fortnight. The smaller springs were aggravated to explode for tourists by emptying a bucket of washing powder into the steaming water.

From Geysir we took the regular bus service to Reykjevik to spend a couple of days before our return journey on S.S.Gullfoss. The city had been an American base in World War II and still had the American influence in its culture. This meant everything was very expensive to our purses. We found the local yoghurt dish, 'skyr', was affordable, but not much more. Int hose days there were only six shops where alcoholic drinks were sold.  The local drunks would buy a bottle of liquor and mix it with their Coca Cola drink in one of the many ice cream parlours. The city was a typical tin-roofed Scandanavian style with modern transport. The buildings were all heated from the readily available hot water springs.

We returned to Leith and went our different ways. I have only met with Heaton and Black from the group once, back in the1960s.

EVENTS THAT HAVE OCCURRED SINCE WE LEFT

We received news that the Great Geysir erupted (20 foot diameter and 60 foot high) when we were on the return boat, the first time for 20 years.

It was only two weeks later that the volcanic eruption formed the island of Surtsey at the southwest tip of Iceland, right under the route taken by the boat.

In April to June 2010 there was a large explosion on Eyjufjallajokull on the east side of the island which disrupted air transport over the North Atlantic and caused huge floods of meltwater on Iceland. The dust caused spectacular sunsets in Western Europe.

These recollections are my memories after 59 years, so please forgive any inaccuracies. What seems amazing now is that I haven't got one photograph of our adventure. I think Mr Crawford had a camera which obviously used slides or prints and was very limiting compared with the modern phone camera. Also imagine the communication that we didn't have. It was a real adventure and we were all indebted to Mr Crawford and Mr Locke.

Below is the Article in the Riponian 1962 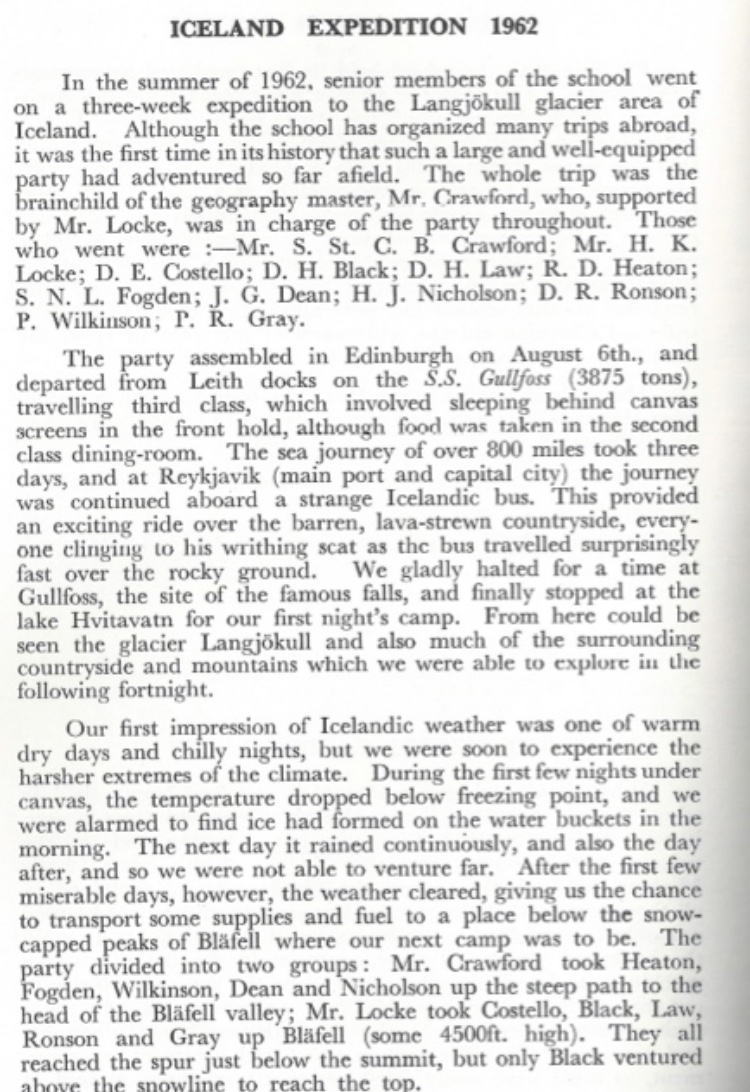 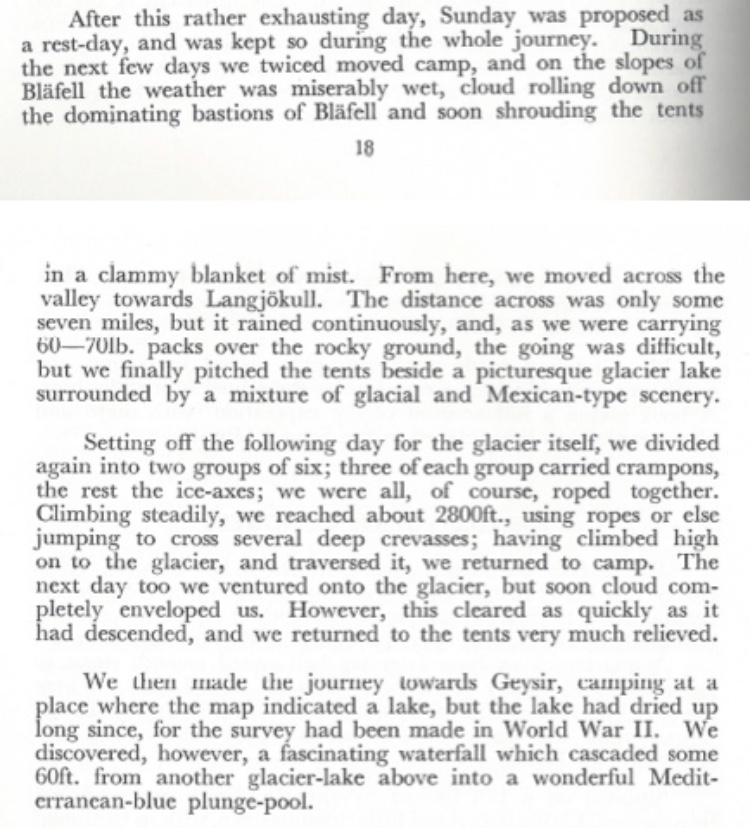 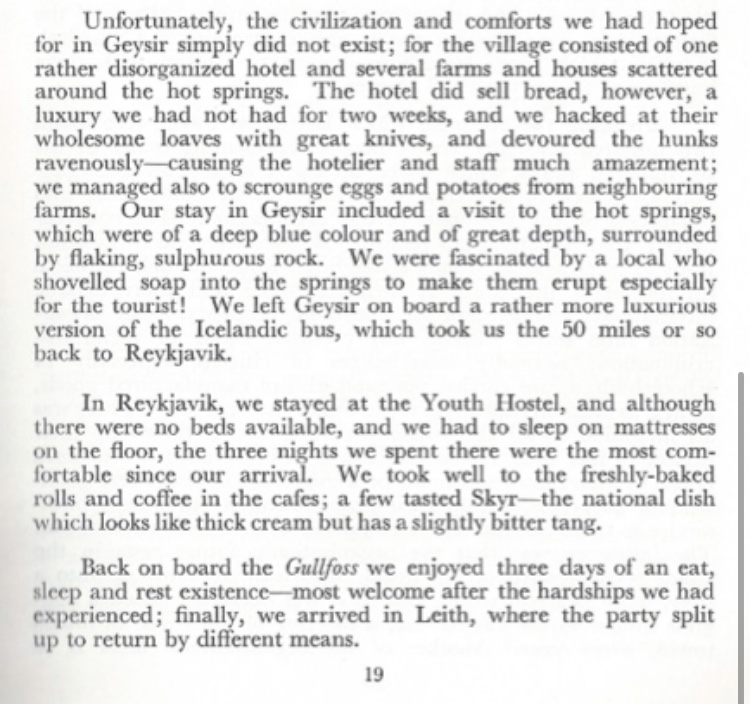