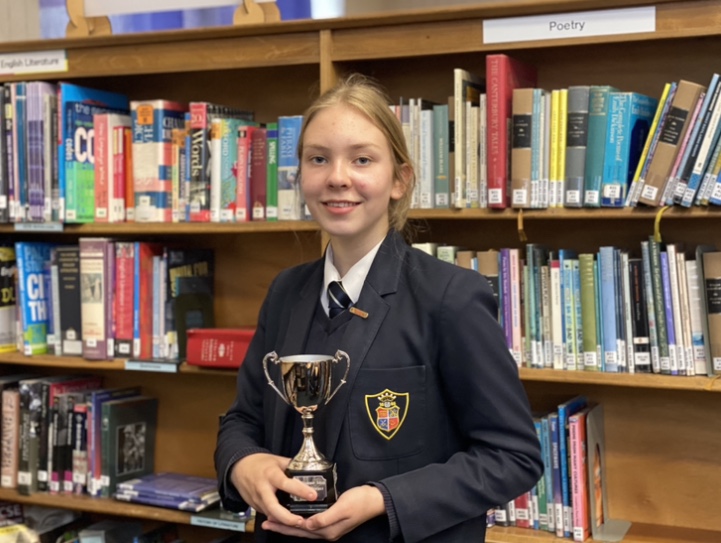 A TALENTED 15-year-old Ripon Grammar school student has been described as a ‘gifted writer’ by a distinguished professor of poetry.

Caitlin Brownlee’s poem, inspired by a storm, won first prize in the student category of our popular annual community-wide poetry competition, now in its eighth year.

Caitlin’s poem was selected from a particularly outstanding field of entries on the theme of 'escape', said Judge Dr Paul Hullah: “In our current Covid-compromised and stifled circumstances, escape is clearly a particularly emotive theme. I found all the entries immensely moving, poignant and heartfelt.”

Dr Hullah, professor of poetry at Tokyo’s Meiji Gakuin University, added that Caitlin’s poem was so irresistible it cast a spell: “Content and form in perfect unison. Absolutely wonderful.” 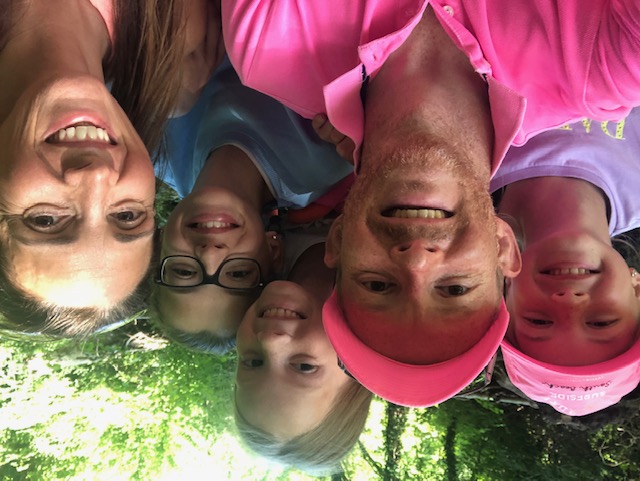 Parent and solicitor Robert O’Hare won the community section, with Dr Hullah declaring that if he wasn’t a published poet, he should be.

He described Mr O'Hare's entry as: “A potent, concentrated, and majestically controlled celebration of nature’s power and language's power in pantheistic poetic unison.”

Caitlin, from Kirkby Malzeard, who usually writes short stories, said she enjoyed the challenge of exploring the structures of poetry for this competition.

“Poems might seem intimidating and informal with too many rules, but you can use different methods to get across ideas, it’s the writer’s choice,” she said.

Her work, exploring exploring feelings of anxiety and negativity, was inspired by a piece of creative writing she produced about a storm: “To read Dr Hullah’s positive comments about a piece of work I’d written and was proud of was surreal.”

Mr O’Hare, whose daughter Iona is in Year 8 at RGS, moved to Ripon with his family from Guildford last year and was inspired to enter while out on a country walk: “I learned to enjoy and read poetry when I was at secondary school - I’m certainly not a published poet!” he explained.

“This opportunity came at the right time. We’d been out in the countryside, and I noticed how much bindweed there was, with its large white trumpet flowers. I thought about how it twines around anything and everything, tying it down, suffocating it, a bit like the pandemic, and how nice it will be to break free from all of its constraints.”

He added: “I remember studying Seamus Heaney at school. His nature poems affected me a great deal with their uncomfortable juxtaposition of its beauty and horror - something I’ve shamelessly tried to re-use in my poem."

Dr Hullah congratulated all who entered: “So many brilliant poems this year. You all deserve a medal.”

Boarding student Joel Wilson, joint runner-up for his ‘daring and ambitious’ poem, said he was inspired by Robert Browning's My Last Duchess: “I wanted to compare the power dynamic between the Duke and Duchess to a teacher and student. I approached it as a narrative at first, and then structured the poem around the story I wanted to tell.”

The 17-year-old, from Gainford, near Darlington, who plans to study law at university and enjoys playing guitar and fencing, added: “Poetry is my favourite medium in English.”

Community runner-up, Alicia Hayden’s work was described as ‘agile and extremely moving’ by Dr Hullah. The former RGS student and Oxford graduate, now studying for a master’s in wildlife filmmaking in Bristol, has written poetry since she was little.

Her partner was the main inspiration behind the poem, she said: “I suppose I thought about writing my poem to him. But I also wanted it to have a more ghostly, sad feel to it - inspired by the work of Aoko Matsuda. I'm also inspired by the natural world; so I wanted to involve some vivid natural descriptions in the poem too.”

This year’s topic, ‘Escape’, in our current COVID compromised and stifled circumstances was/is clearly a particularly emotive theme. I found ALL the entries immensely moving, poignant, heartfelt. But best of all, I also felt, in every entry, the poise and authority of truly switched-on poets calmly curating their turbulent feelings and skilfully shaping them into proper poems. That is so very pleasing to me. It’s exceptional. Yes, we START with Wordsworth’s ‘spontaneous overflow of powerful feelings’, but that’s only the starting point: emotion is the ‘origin’, but the POETRY happens when those potent unshaped feelings are 'recollected in tranquillity’, and artfully, wittily, carefully, elegantly set down and sculpted into something polished and pristine. A lot of what passes for poetry nowadays isn’t really poetry - it’s just people shouting and showing off: very occasionally ingenious, but with no wider significance, and seldom original - but 100% of the poems I judged this year unquestionably DO deserve to be called poetry. Well done, everyone!

1. Category One: Pupils of RGS only. NB. Again, SO MANY brilliant poems this year. Congratulations to all who entered. I hope it was a useful thing to do. You ALL deserve a medal.

Highly Commended: Evie Ash - this is masterful writing. The subtle rhymes and the use of differing line lengths is purposeful but done in such an elegantly understated way. It’s all so maturely composed, but I just felt that the last quatrain didn’t somehow (semantically) match with what had gone before. I would’ve cut the last four lines and ended it at ‘I was truly alone’ (even though it means losing the alone/own rhyme, which is beautifully done). The opening of the second stanza, after and in the midst of all that loft imagery before it, ‘But when I close the book / I’m just a girl’ is brilliant: a real showstopper.

Highly Commended: Cait Greathead - this has tremendous sing-song melody, used as basis for an enigmatic, singular vignette that’s mysterious and beautifully paced. It has a nursery rhyme quality but a hint of malice too, which of course all the best fairy tales and nursery rhymes must have. Gorgeous. Someone very much engaged with and in control of language.

Highly Commended: Ewan Saunders - compelling and dramatic. Apart from the ‘Animals to the slaughter, mankind to the flame’ line, which is clumsy and unnecessary and comes far too early in the poem to be justified, this is an imagist masterpiece! The last stanza reads like the very best French ’symbolisme’ of the late-19th early 20th century! This is an intriguing piece of very proficient poetry. Haikuesque! Enormous potential.

JOINT RUNNER UP: Joel Wilson: a lovely surprise, this: a daring and ambitious but respectful and very successful remake of Browning’s brilliant ‘My Last Duchess’ for our times. It’s witty and playful (as was Browning’s original) but poignant and profound too (as was Browning’s). Great work. In no way overdone (it is so easy to overdo it when writing in homage), the use of language is restrained and pointedly understated, with the moving last 3 lines ‘In the snow, his resting place…’ impeccable in their plaintive wistfulness. Very good indeed.

JOINT RUNNER UP: Kai Newby - I fell in love with the austere opening couplet, and found the studied tone of religiosity impactful, uplifting, and very powerful indeed. Wonderful. Some brilliant lines - ’The grass is visible in green hands waving’ - but I just thought the ending could have been a little tighter. It’s unnecessary, detracts rather than adds to the effect already created. In fact, if it had ended at ‘…teasing me to come out.’ I think it would have been 1000 times better and would almost certainly have won!

The first thing I do when I begin to judge the poems, is to read the poem out aloud. How does it sound? Poetry’s music without music. Is it musical, then and, just as important, what does that musicality do? How does the music support and enhance the meaning? And how do the silences work, the pauses. Often they’re as important and meaningful as the words. As soon as I started reading Caitlin's poem out aloud, I knew we had a winner. It’s irresistible. Literally, you can’t resist: this poem picks you up and holds you, takes control of you, traps you in its spell. It7s funny that when we write words, we call it ‘spelling’: this poem is truly ‘spelling' - it is casting a spell. This is content and form in perfect unison. It’s a poem about breathing that shapes and controls your breathing as you read it. Absolutely wonderful.

Behind my eyes a tangle of thoughts

Swell and fold and trip and tumble,

Crash and thrash and writhe.

All those monosyllabic verbs doing exactly what they say, enacting the drama in words. A true poet in perfect control of language, amazing to witness. And that huge, sudden, arresting ‘BREATHE’. In case there was any doubt. Effortlessly authoritative writing. And the circularity that the ending brings makes a kind of Zen mediation of the whole poem. The shape of the poem on the page os meaningful too. Starts staccato ’Swallow it down. Bottle it up.’ Then builds up to the big plump— there it is! — ‘crescendo’ in the middle then tapers off so gently into a placid acceptance. Wow.

The last section is sublime:

Silken air trading through my being,

Smoothing me to ripples.

Not only are these IMAGES beautiful - just listen to the SOUNDS. There's so much assonance and internal rhyming going on. It’s music. Every time you read it you hear something new. It’s a gift that keeps giving from a gifted writer. No hesitation at all in naming this as the winner.

2. Category Two: Staff, Old Rips, inhabitants of Ripon and friends of the school. NB. Again, thanks and congratulations to all. How wonderful. I wanted to give a prize to everyone.

Highly Commended: Allison Goodwin - some nifty internal rhymes — ‘We must not be afraid to escape the tirade’ is particularly rousing — and effective phrasings. A worthy effort.

RUNNER UP: ALICIA HAYDEN - an agile and extremely moving piece of writing. The initially knockabout conversational style is deceptive: it’s an eloquent, layered tapestry of sumptuous imagery and beautifully precise phrasings. To read this poem aloud (if you can get through it without choking up and shedding a tear: I couldn’t!) is to appreciate just how sophisticated a piece of work it is. Lovely. A love poem in so many ways. It’s the kind of poem that makes you envy the person to whom it’s written!

WINNER: ROBERT O'HARE - ah, now this IS poetry: such rich and pleasing and meaningful echoes of Hopkins and Hughes here! I couldn’t say ’no’ to this potent, concentrated, and majestically controlled celebration of nature’s power and language's power in pantheistic poetic unison! And just when you begin to suspect that the plethora of busy alteration and exclamation in the sestets might be veering (or, rather, hurtling!) toward the excessively hyperbolic — a surfeit of skilful linguistic gymnastics! — the masterstroke comes with the coda-like quatrains that calm in a relatively minimalist yet still heroic manner: 'Build back. Be better. Sing out.’ Indeed. I strongly suspect Robert is in fact already a published poet? If not, he could be, should be. 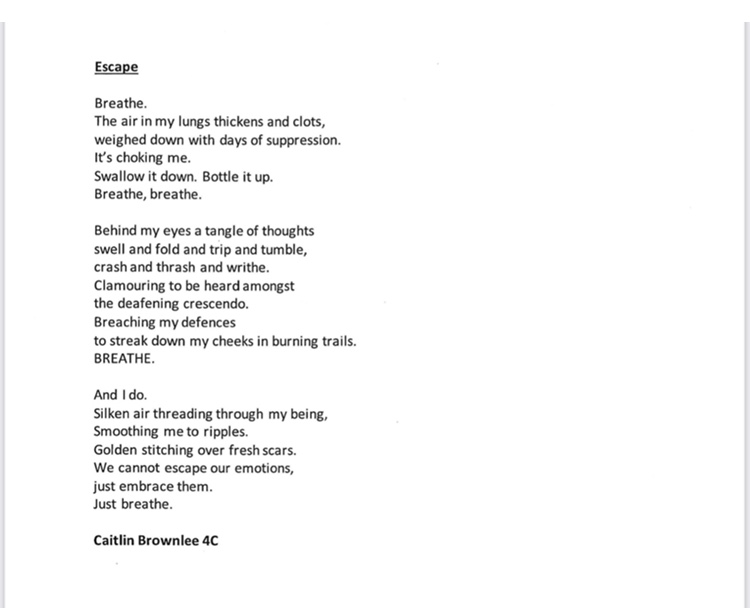 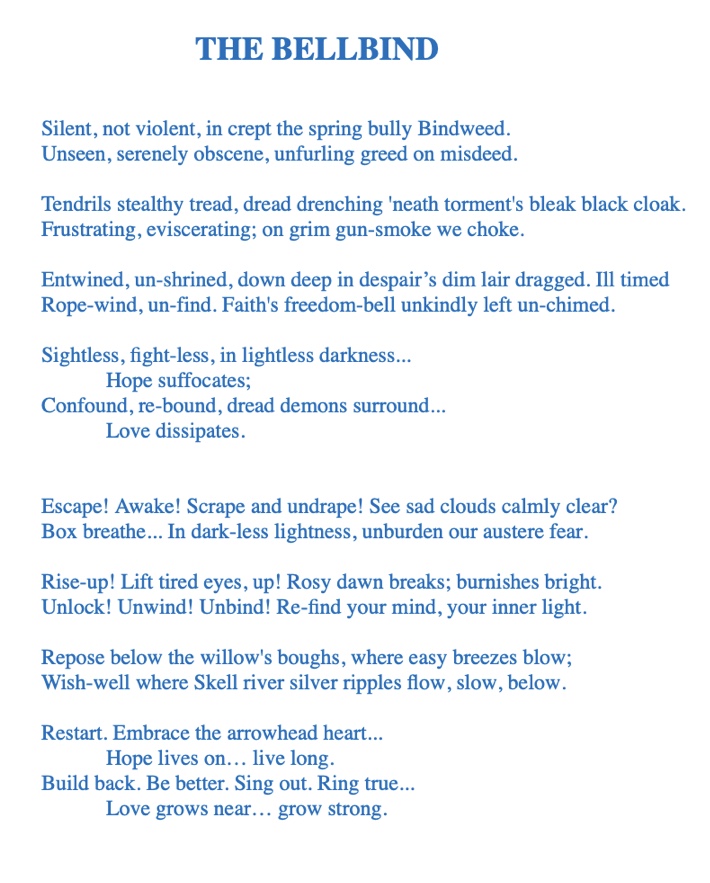 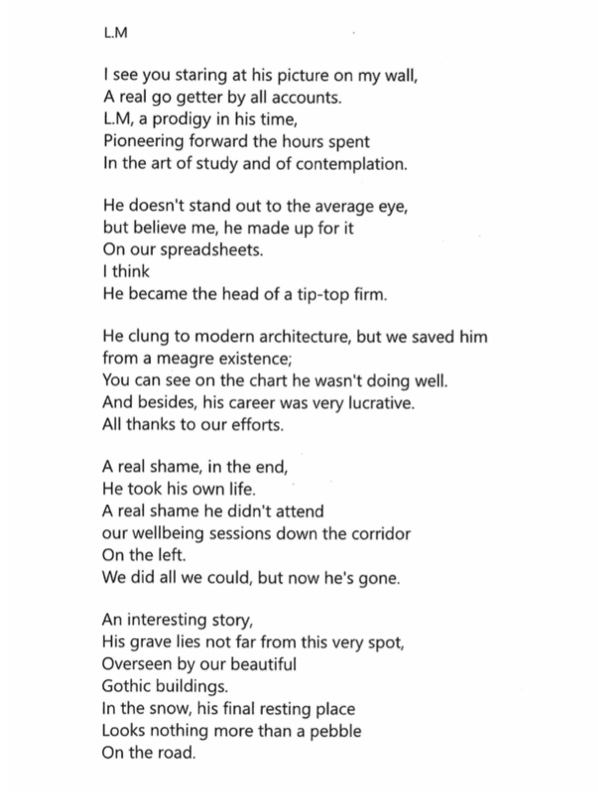 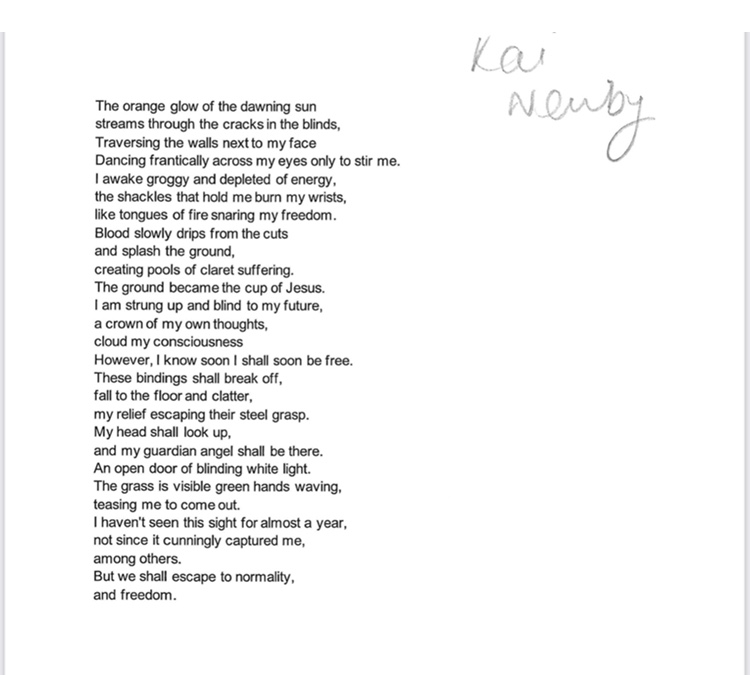 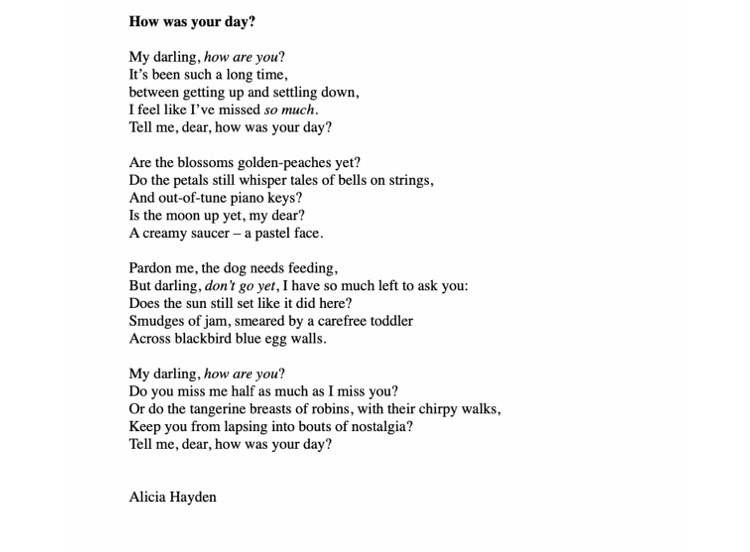 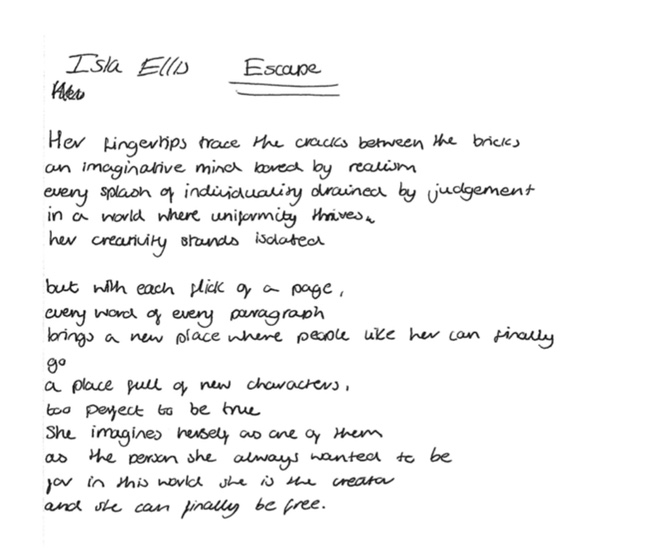 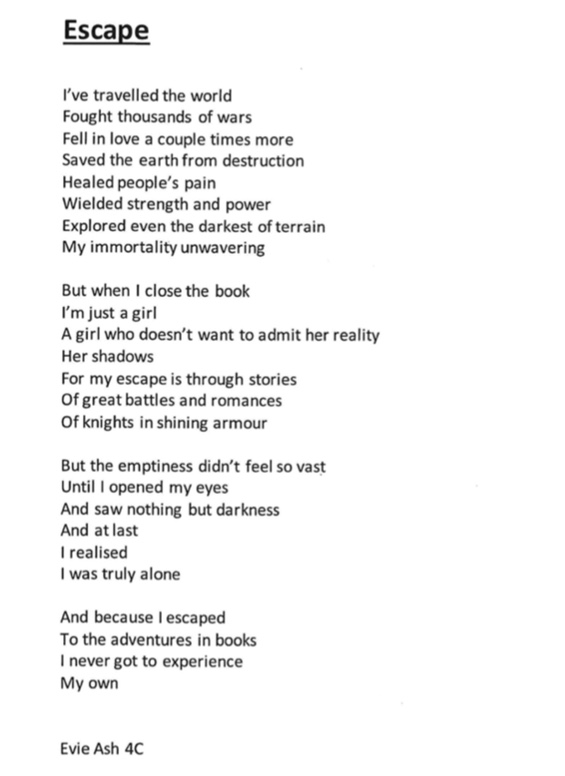 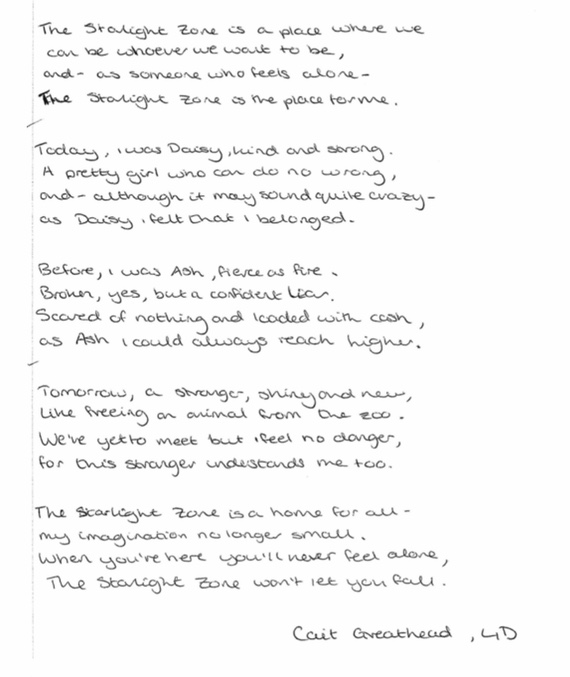 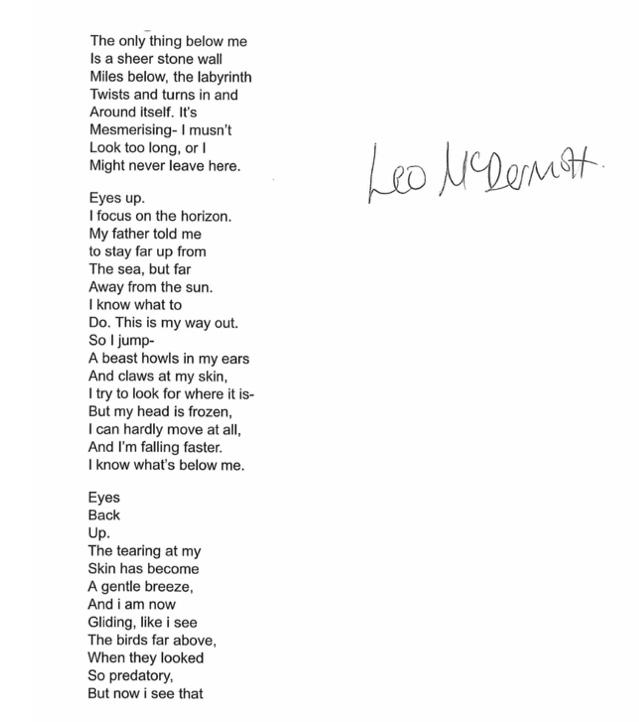 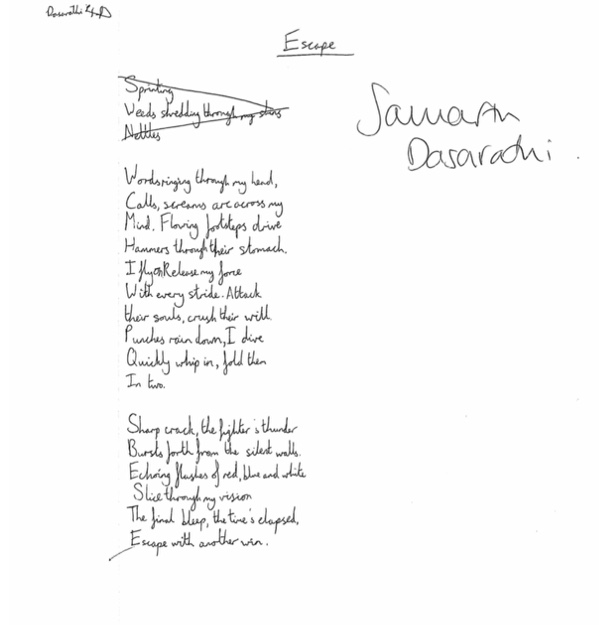 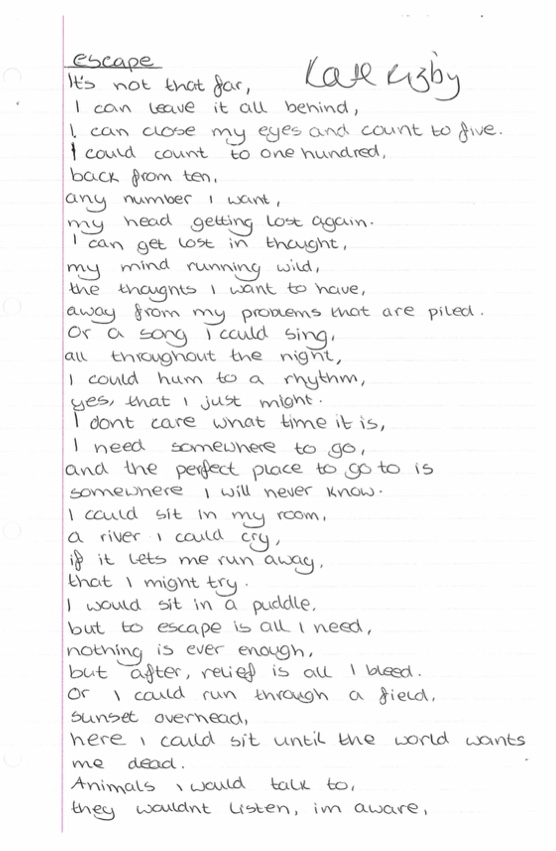 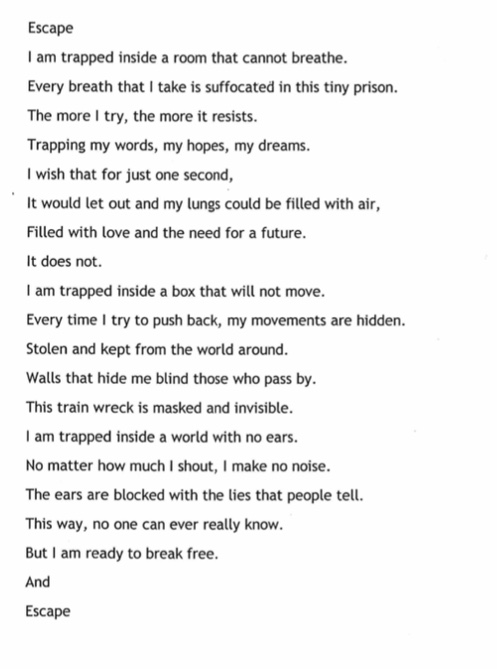 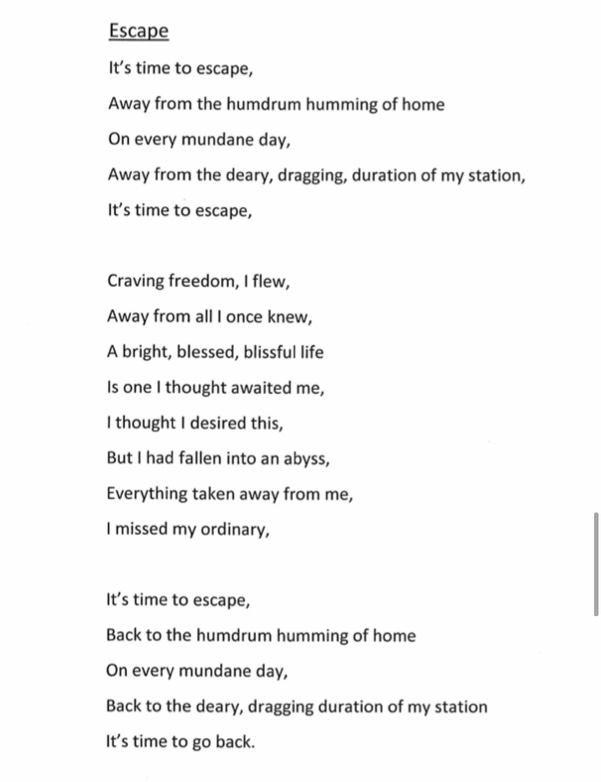 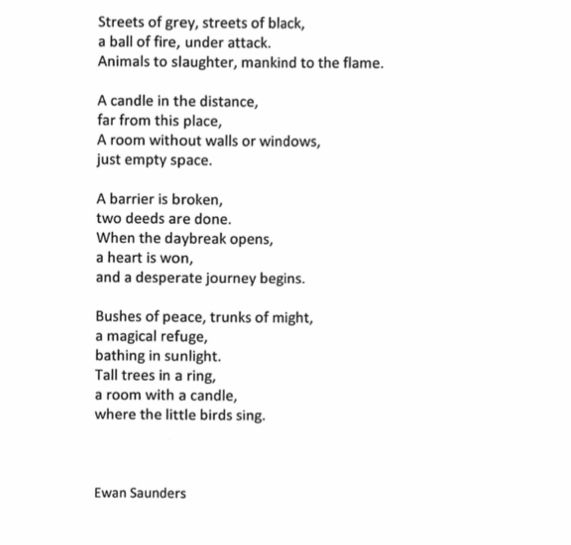 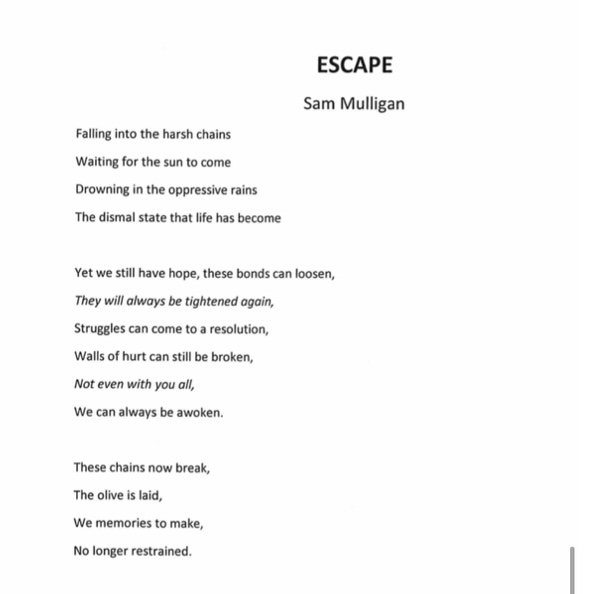 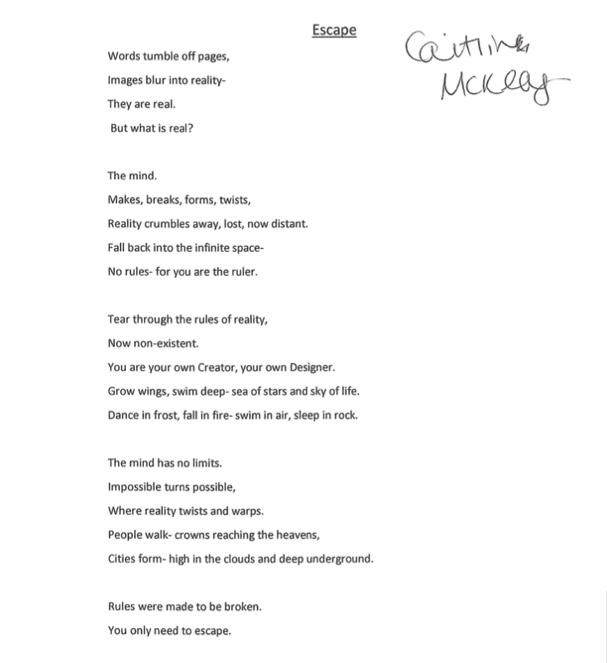 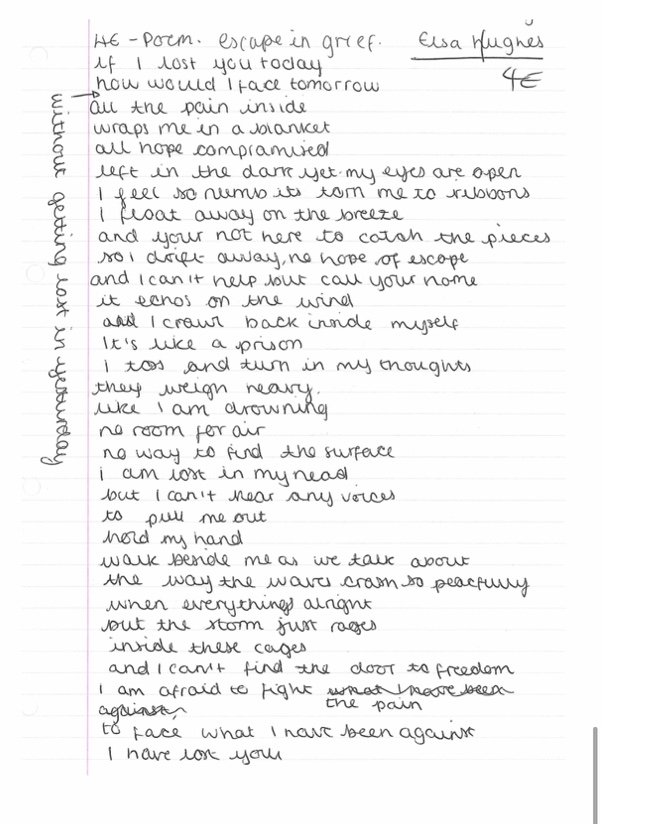 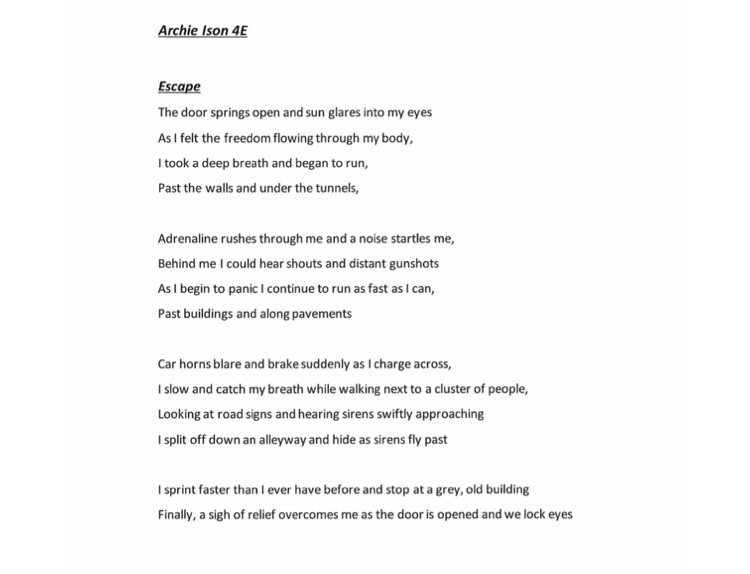 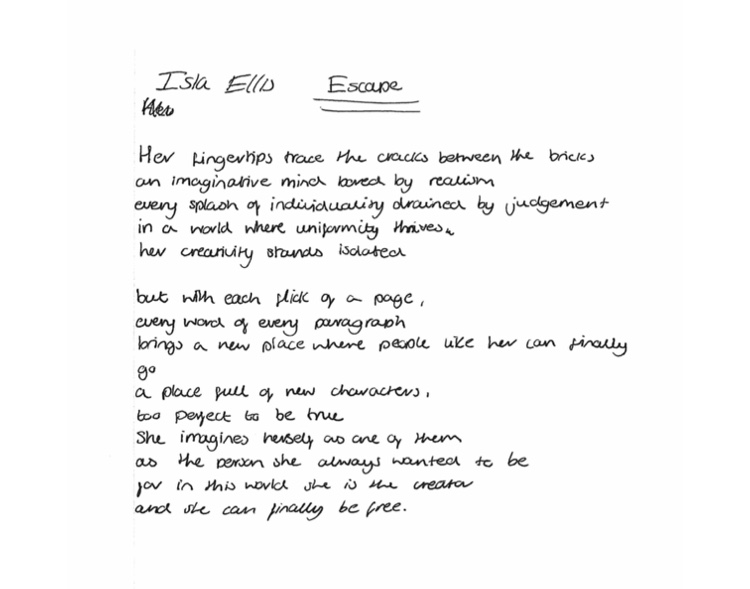 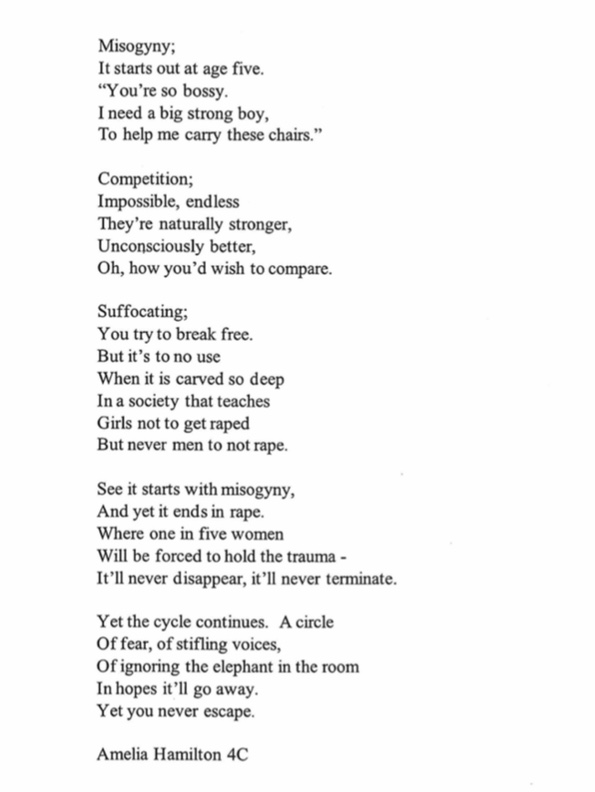 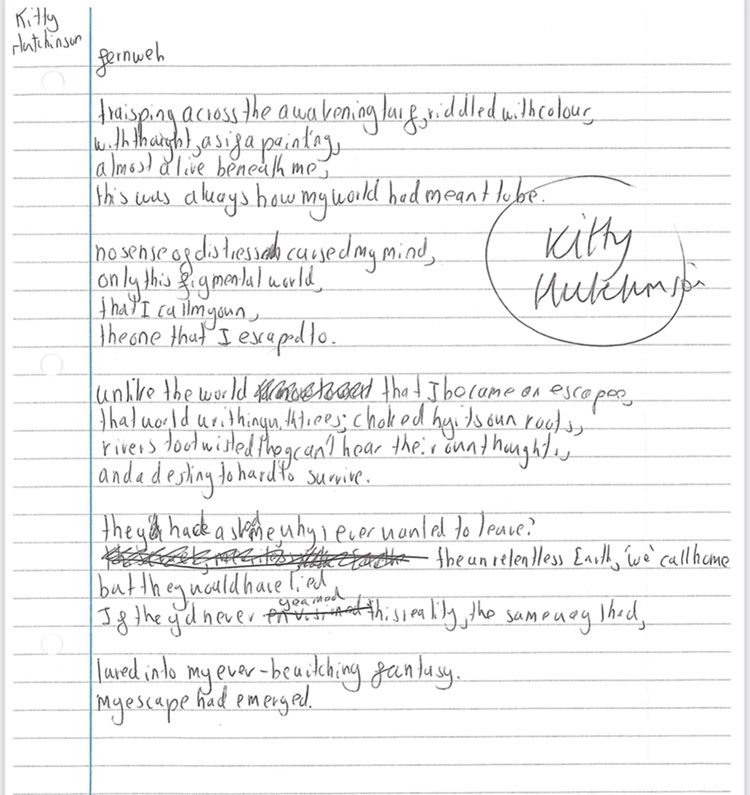