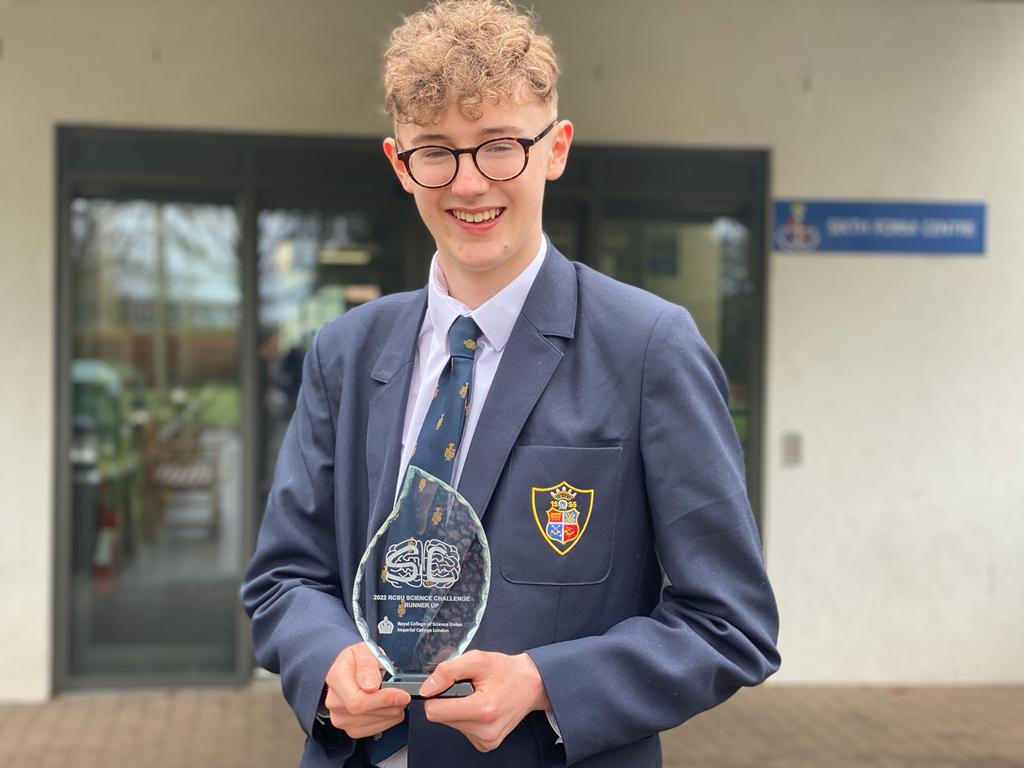 A TALENTED young RGS scientist has been invited to talk with politicians in the House of Lords about his thoughts on climate change following his success in a major international science competition.

Milo Smith won the runners-up award in the Royal College of Science Union challenge, which attracts entries from all over the world and is judged by eminent scientists including Lord Robert Winston.

As well as being presented with a trophy at a glittering awards ceremony held in London’s magnificent Royal Institution, 16-year-old Milo has been invited to meet politicians during a tour of the House of Lords with fertility expert Lord Winston on May 11.

In his entry, Milo argued: "The hesitance of global leaders to act upon climate change – whether due to economic incentives or scepticism in their voting base – makes it far less likely that the devastating ecological or economic effects of climate change will be mitigated before it is too late."

The competition, run by Imperial College, London, asks students to demonstrate their skills in debate and reasoning to communicate science in an engaging, concise and creative manner.

The RCSU Science Challenge is designed provoke thought amongst scientists of the future regarding the problems affecting society and how can they use science to help resolve them.

Milo’s prize-winning essay was based on a question posed by Lord Winston: ‘Why are so many citizens reluctant to accept that the Earth's climate appears to be changing? Should scientists be worried by this?’

The lower sixth form student, from Knaresborough, who hopes to study physics at Imperial College or the University of Cambridge, said he was overjoyed to receive an award.

Studying maths, chemistry and physics at A-level, he added: “The awards ceremony was amazing as it was held in the Royal Institution lecture theatre, which is of huge scientific importance in the UK, and two guest speakers spoke on climate.”

You can read Milo's essay, below:

Why are so many citizens reluctant to accept that the Earth's climate appears to be changing? Should scientists be worried by this?

I argue that hesitancy to accept climate change is rooted in the belief that past climate change has been natural – a flaw in inductive reasoning – and because scientific methods of peer-review create a false impression of disagreement. Scientists ought to be worried about this because climate change will result in economic costs and mass extinction. Widespread climate skepticism makes global action – the only way to avoid these consequences – infeasible because of personal skepticism on behalf of leaders and a lack of pressure from citizens on them.

It is worth considering whether scientific methods are truly infallible. Karl Popper argues that any scientific theory must be falsifiable and thus should not be believed with certainty. This belief extends to scientific ‘fact’. Scientific theories are characterized by the ability to be overturned or reviewed by future observations. If theories are not deductively based, then all science is proved inductively. For example, someone claiming that the Sun will rise tomorrow simply because it has risen every day before makes an inductive claim – this creates a theory with no strong basis for the reasoning. This inaccuracy comes from the reasoning behind this logic (simply because it has happened before), whereas deductive reasoning follows logically. The consequence of the problem of induction is that we commit to potentially false theories.

If our evidence for climate change is inductive in nature then we cannot definitively say that global temperatures will correlate with greenhouse gas emissions in the future, only that these figures have risen rapidly since the Industrial Revolution. The need for criticism and peer review in science is necessary to develop our understanding. But this process of review and critique create the appearance of conflicting viewpoints on topics in which the scientific community is in near total agreement. This confuses many citizens trying to ascertain the most accurate theories.

The geological record shows evidence for many climatic variations in the Earth’s history – Khairullina et al assert that these variations cannot be manmade and are thus caused by external trends. Factors such as the Earth’s position within the Milky Way, sea levels/ocean currents and volcanic activity can all influence the global climate

However, closer examination of data reveals modern global warming is caused (at least partially) by the greenhouse effect. The Earth’s average temperature of ~14oC differs hugely from the expected effective temperature from the Sun’s radiation of ~-19oC

As explained above, the greenhouse effect has a massive effect on the atmospheric temperature. It depends on greenhouse gas concentrations – the most abundant of which is CO2. Fig 1 reveals that the global concentration of CO2 has increased rapidly since 1955 (although CO2 has been released in large quantities since the industrial revolution, the rate of increase has been largest in recent years). This has contributed massively to rising global temperatures. The concentration of CO2 had stayed within 260-280ppm for the previous 10000 years but in the last one hundred years it has increased to above 400ppm. Ice core records from previous “ice ages” place the concentration at 170-300ppm, demonstrating how abnormal a rapid increase to 400ppm is

The evidence for global warming is overwhelming and there is assent in the scientific world on both the effects and the causes but as discussed earlier, the climate is affected by a network of factors and no scientific theory developed soon will be able to describe the climate with 100% accuracy. The evidence above demonstrates the consensus is that climate change is almost definitely man-made, and this conclusion is what scientists attempt to communicate to the public.

The lack of a desire to reduce fossil fuel consumption is because capitalism acts as a mechanism for efficiently allocating scarce resources for consumers, and pollution is a direct consequence of consumerism

In conclusion, the hesitance of global leaders to act upon climate change – whether due to economic incentives or scepticism in their voting base – makes it far less likely that the devastating ecological or economic effects of climate change will be mitigated before it is too late. If scientists care about significant man-made climate change , climate skepticism should worry them due to the potential effect on quality of life around the globe.