▶ News ▶ SIXTH FORM: How students are stretching their minds

SIXTH FORM: How students are stretching their minds 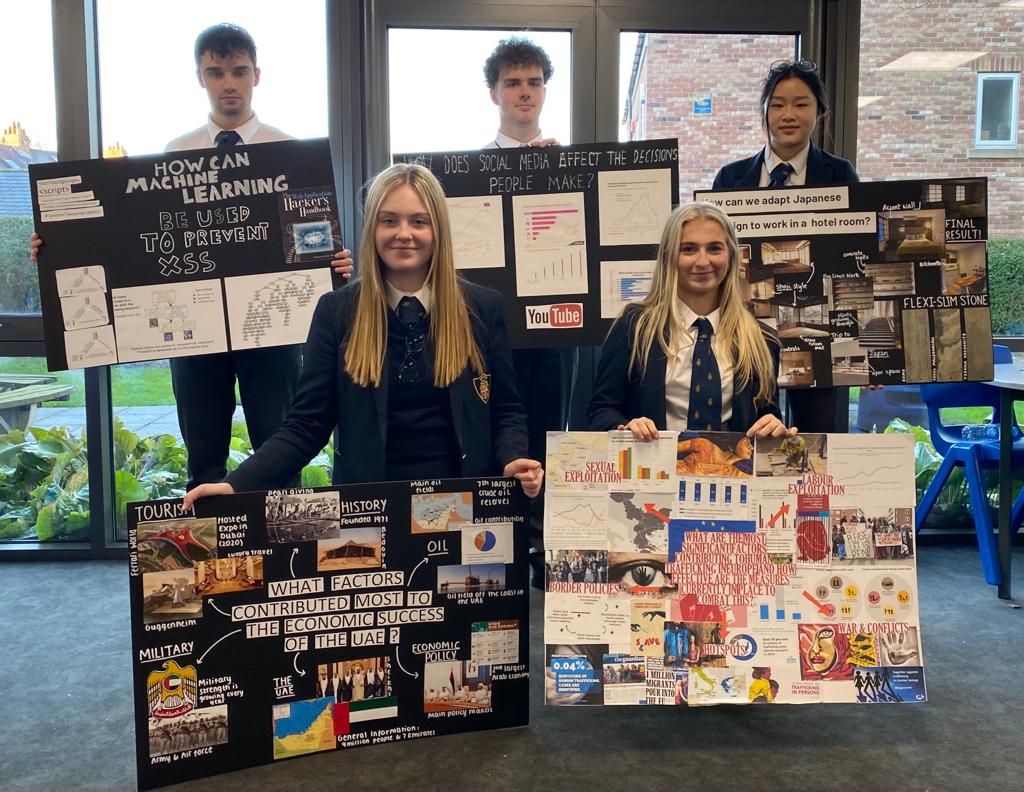 Sixth form students are stretching their minds researching a range of riveting subjects, from human trafficking to cyber security, the exploitative nature of CCTV and the effect female pop culture has on feminism. We discover more about some of the topics they have chosen and the valuable new skills they are gaining outside A-level studies

AROUND 65 RGS students are embracing the opportunity to combine A-level studies with an extra qualification which allows them to explore a subject they feel passionate about.

They are rising to the challenge of producing extended essays and presentations, worth half an A-level, which provide good preparation for university.

Focussing on a range of fascinating topics, including everything from drug addiction treatments to the exploitative nature of CCTV and how world events have affected the horror movie genre, students present their projects in front of staff and students.

Candidates choose a research question to explore in a 5,000-word essay and must give a presentation to showcase their results and the journey they took.

They can also enter a scientific study, perform an original work such as a short play or make a product, alongside a research-based 1,000-word essay. 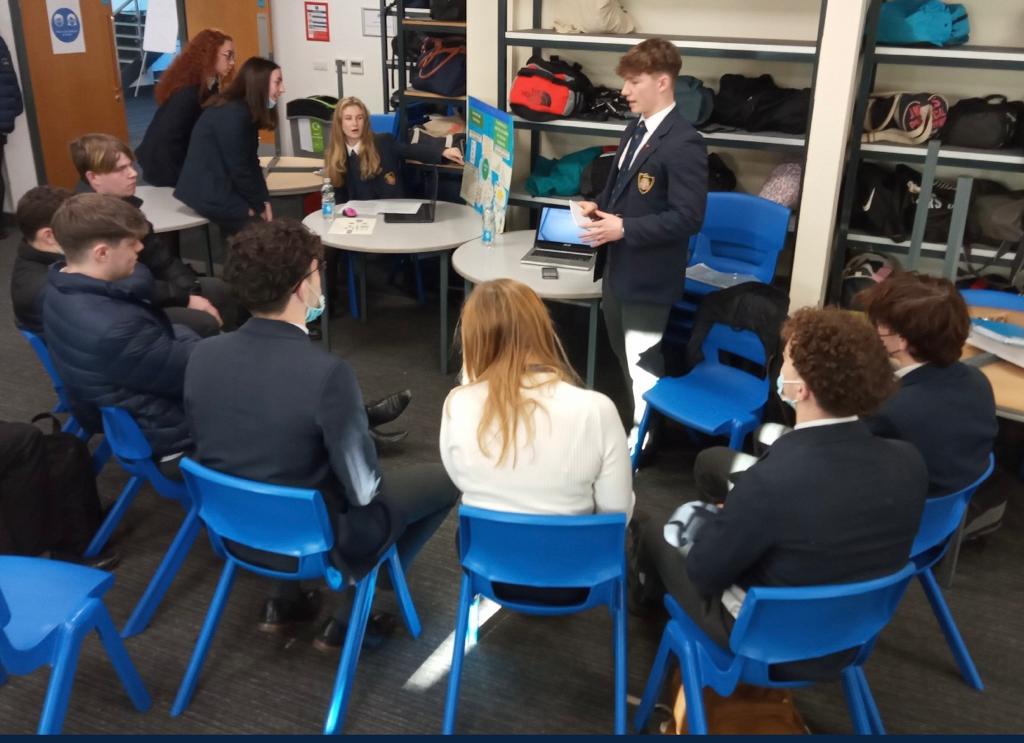 Kumar Vrinda, 17, from Northallerton is taking A-levels in biology, chemistry and maths and hopes to study medicine at university

How feasible is gene therapy as a treatment for drug addiction, compared with the efficacy of other current treatments?

“I chose my subject because I have always had an interest in the science of drug addiction as well as the technology of gene editing. After discovering that the likelihood of an individual developing an addiction could have genetic factors, I decided on my title by combining my two areas of interest.

“I have picked up a variety of research and essay-writing skills, which I would not have gained from my academic subjects. I have also learnt the importance of time management and meeting the deadlines I had to set myself.” 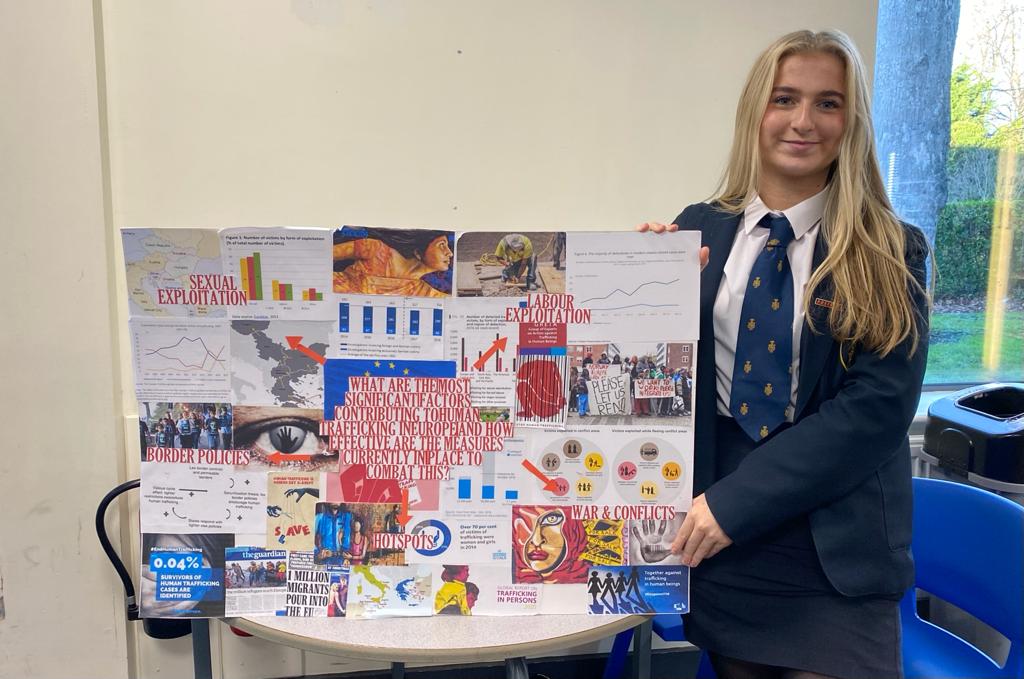 Niamh Hutchinson, 17, from Alne, near Easingwold, is studying geography, biology and psychology at A-level and hopes to become a human rights lawyer after university.

What are the most significant factors in human trafficking in Europe and how effective are the measures currently in place to combat this?

“I chose this subject because I have a relative, Nina Butterworth, who works for a charity called Hestia in London which deals with human trafficking victims, and it links well to human geography which is my favourite part of geography.

I didn't realise the scale of the issue of human trafficking until speaking to Nina, who is an outreach advocate in modern slavery response team at Hestia, dealing with people from all over Europe and Nigeria. Some of the routes her clients have taken to reach London really shocked me, especially because there is such little in the media about the issue.

The main things I learnt were the importance of time management and how to reference correctly.” 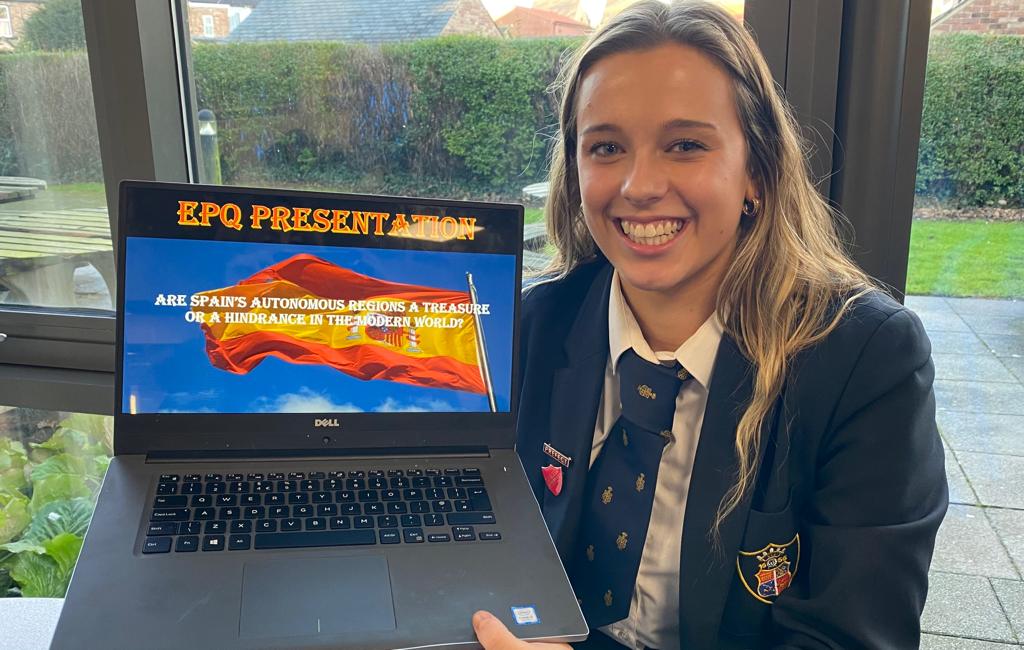 Eve Maylor, 17, from Ripon, is studying French, Spanish and psychology at A-level and plans to take a degree in modern foreign languages.

Are Spain’s very different autonomous regions a treasure or a hindrance in the modern world?

“I am interested in understanding the interrelationship between culture and contemporary affairs, hence my title's specific reference to the ‘modern world’. The topic complemented my A-level studies and enabled me to further explore something I was eager to gain a better understanding of.

“Alongside the knowledge and understanding I gained regarding the positive and negative impacts that autonomy can have on a nation, I was also able to develop my critical thinking skills. The opportunity to practise being analytical and evaluative has proved useful for my A-level studies.

“I have also always found public speaking relatively nerve wracking so part of my reason for completing the EPQ was the importance of pushing myself out of my comfort zone to improve in this area as it is a vital life skill.

“Finally, being able to utilise my language ability to converse with native Spaniards regarding their opinions on the debate, and to read a novel and watch a film and documentary in the target language was exciting as it really brought my school studies to life.” 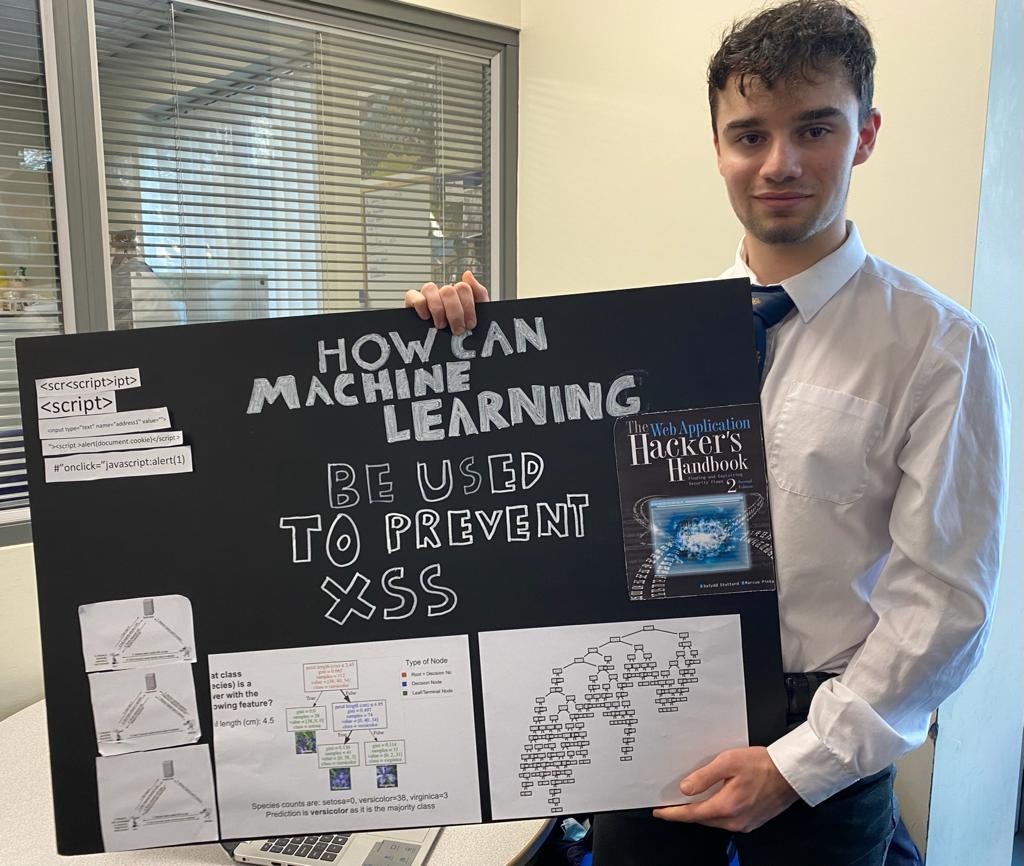 Jack Tudbury, 17, from Ripon, is studying maths, physics and biology at A-level and plans to study computer science and cyber security at university.

Artefact: How can machine learning be used to prevent cross-site scripting (XSS) vulnerabilities?

(XXS attacks are a type of software attack in which malicious scripts are injected into otherwise benign and trusted websites. Jack has designed a piece of artificial intelligence software, a very sophisticated piece of coding which is 99% effective in sifting our malware from data).

“I chose this topic due to my interest in cyber security and I wanted to see the potential for machine learning in the cyber security sector. It involved making a Peine of code to generate a decision tree for use in a web application in order to prevent malicious cross-site scripting attempts.

"I took 13,000 pieces of data which were malicious and 13,000 which were not and using an algorithm I made a decision-tree classifier which was based on how many certain characters were in a string to make the model, then split the model into 67% used to train and 33% used to test. This came out with more than 99% accuracy.

"This is something I hope to develop further outside the EPQ and find a way of making it more accurate and secure for use on a website. It's pretty accurate but I'd need to collect a lot more data to get it to the point where it could be used on its own and if I manage to get it to the point where it's commercially viable I'd be more likely to release it as open source instead.

"I started properly coding during my GCSE computer science course and learned a basic understanding of a couple of coding languages and concepts through tutorials.

“The main things I learnt during the project were coding of Python and VBScript and the technical aspect of data collection and sanitisation to allow it to be used for machine learning. I also learned about the way hackers can exploit XSS vulnerabilities to be able to perform attacks on web applications." 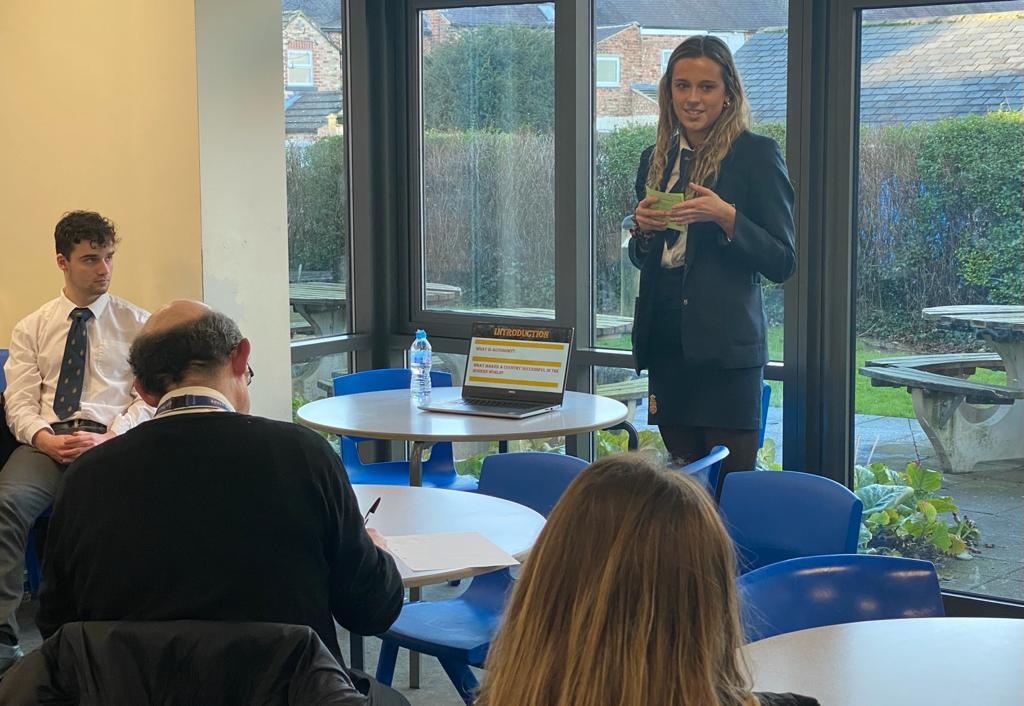 Daisy Hynd, 18, from Skelton-on-Ure, is studying history, art and business at A-level and hopes to travel in SE Asia and Australia during a gap year, before studying at Glasgow University.

“I chose feminism and pop culture as my subject for a number of reasons. I have been interested in feminism for years and questioned if this is compatible with my admiration for sexualised pop culture figures such as Beyonce and Taylor Swift.

“I was further motivated when I discovered the Guerrilla Girls, an anonymous group of feminist, female artists, and feminist artist Barbara Kruger at the Tate Modern, London, in 2021.

“The biggest thing I have learnt is the importance of significant research and detailed pre-planning before writing an essay that requires such depth of investigation.” 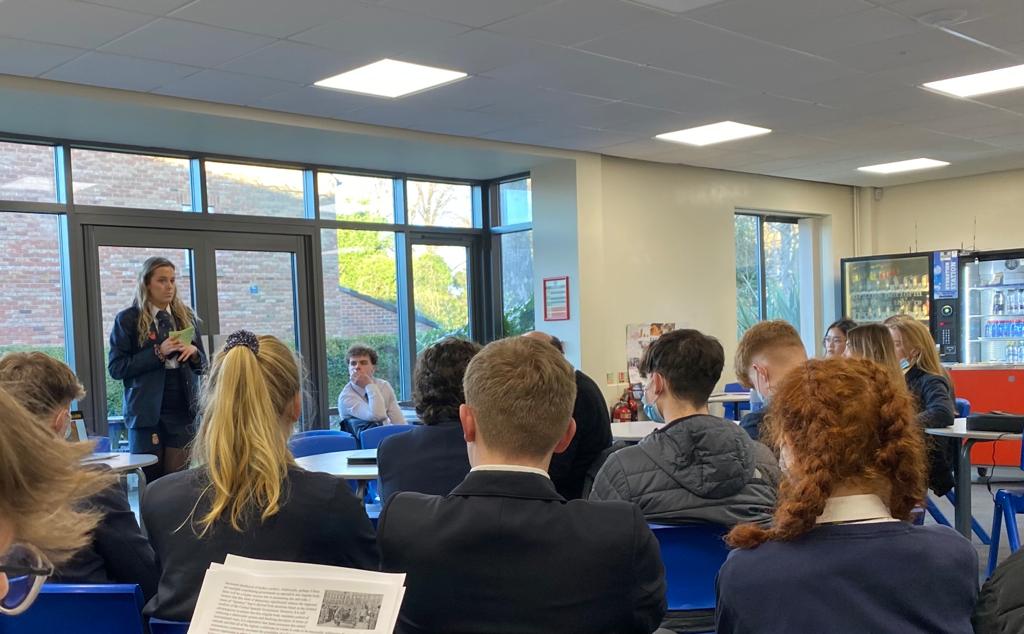 Is the use of CCTV exploiting civilians and should it be made illegal around the world?

“I chose my EPQ topic due to my interest in crime and the effectiveness of investigation, with links to human rights and how easily people with power can exploit others.

“I've learned the importance of organisation and planning while having the motivation to keep on track over a long period of time while writing my EPQ. It is something I struggle with so have had to push myself to try and complete it successfully.”

Alice Ward, 17, from Eavestone, is studying history, English literature and art at A-level and hopes to study film and television production at university.

To what extent have key events in the last century shaped horror films in Western culture?

“I chose this subject after doing virtual Springpod work experience in television in lockdown which involved everything from writing a script to designing a movie poster but but the most interesting part was the live talks with people in the industry and they told us what they did, what they enjoyed about their job and what they found challenging. After that, I wanted to do more research on it.

"I decided to focus on horror films as I felt the genre was quite broad. I hadn't watched many horror films before my EPQ but I had to watch them so I could understand them and write about them and how they had changed over time. I would say the researching for my EPQ has made me a horror movie fan!

“The project has helped with my time management and helped me decide what I want to do when I leave school as this is an area I'm interested in. I have learnt how to reference my research.” 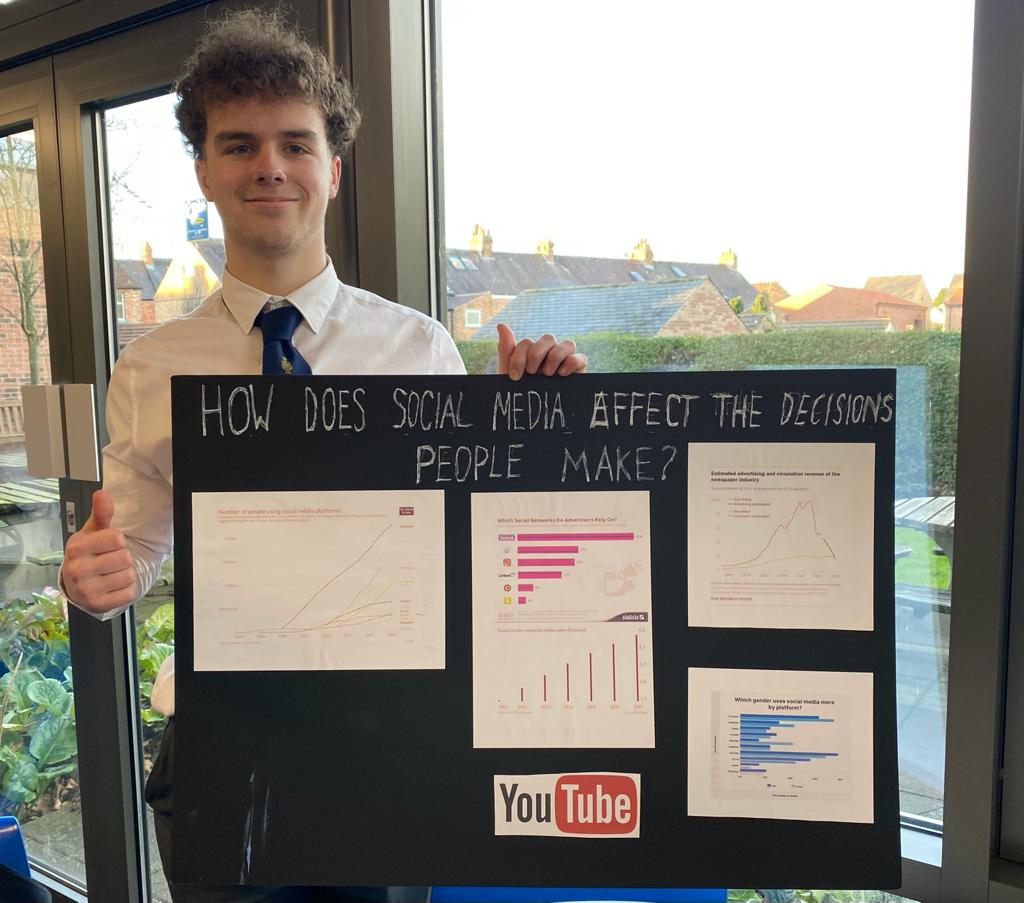 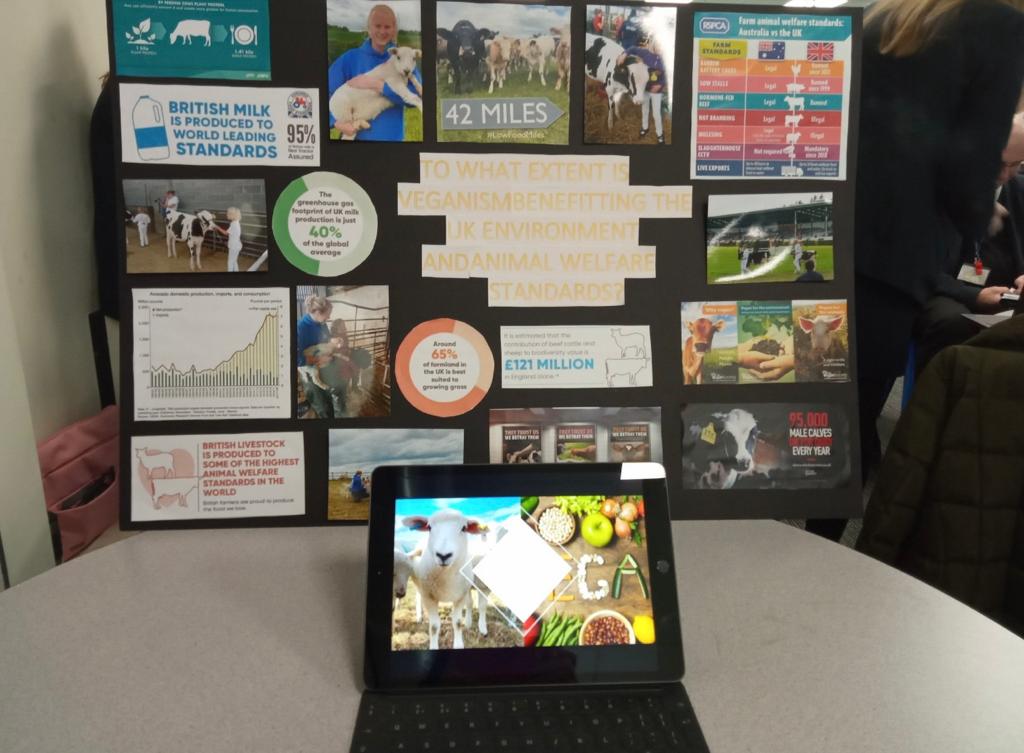