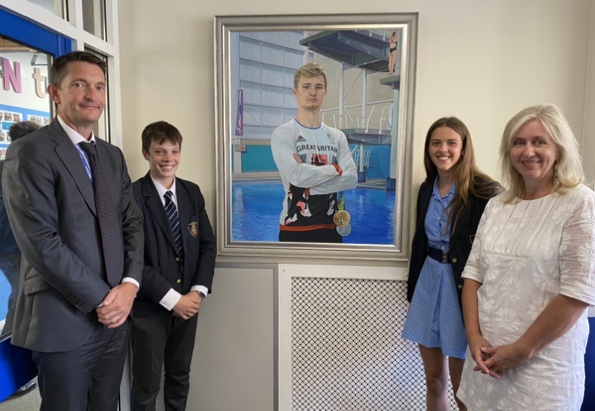 A PORTRAIT of top GB diver Jack Laugher has been awarded pride of place at his former school in Yorkshire as Olympic Games excitement builds. (published 21/7/2021)

The painting, by artist and parent Fiona Scott, is inspiring hundreds of enthusiastic young students at Ripon Grammar School, as they prepare to cheer on past pupil Laugher in Tokyo.

Headmaster Jonathan Webb said he was thrilled to have the stunning oil painting of the Olympic gold medal winner hanging in school, where it is attracting lots of attention in the run up to the Games: “Students and staff are all very excited and we’ll all be willing him on.”

Ms Scott, who arranged a sitting with Laugher at the Leeds Aquatics Centre after meeting him at an RGS sports awards evening, revealed he was delighted to hear the painting is now on show at his old school.

Keen swimmer Darcy Harper, 15, from Kirkby Fleetham, was among the students lucky enough to meet the sporting hero when he returned to present prizes to pupils three years ago. 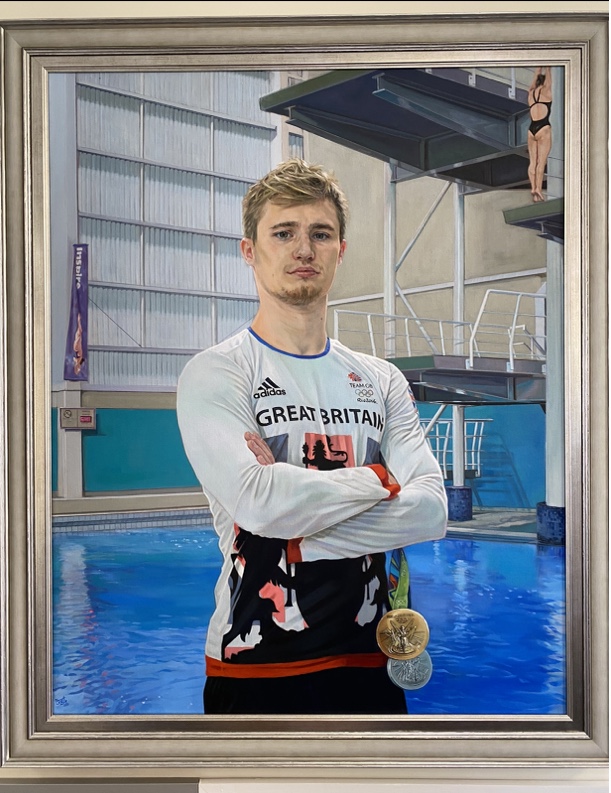 The 15-year-old, who has competed in national schools’ finals, said: “I found it inspiring to hear his story and how far he’s come. It encouraged me to push myself even further. Every time I walk past the painting, I'm reminded of how he was once where I am now.”

Laugher, who left RGS in 2013, is aiming to retain his men’s 3m synchro Olympic title with new partner Dan Goodfellow, with ambitions for another gold in the individual 3m springboard event.

His success also inspired Dan Brown, from Burton Leonard, near Harrogate, who has represented his school in county swimming championships, athletics and tennis.

The 14-year-old, who aims for a career in sports, said: “He has shown how it’s possible to combine a professional sporting career while managing his schoolwork, which I admire.”

Dan, who hopes to work in sports science or physiotherapy alongside competing in sport, added: “His example inspires me to continue working towards my own sporting goals.”

Swimmer and runner Eliza Polito, 14, from Green Hammerton, near York, added: “I think it’s so cool to know that Jack Laugher came to this school and has gone on to achieve so much.”

Artist Ms Scott, from Helmsley, whose two sons are former RGS pupils and daughter Lily Wainwright a boarding student in Year 10, told how she was inspired by Laugher at the school sports awards evening.

“I asked if I could paint his portrait and, fortunately, he said yes. I was lucky to get the sitting as he had a very busy schedule training for the European Championships and the Tokyo Olympics.

“He was a fantastic subject to paint, such an incredible young man and a huge inspiration to students.”

She completed the oil on canvas in 2020: “I spoke to him about the possibility of having his portrait on show at the school and he was very keen.”

Ms Scott, sister of broadcaster Selina Scott, has exhibited in a number of prestigious exhibitions, including The National Portrait Gallery, The Royal Academy and The Royal Society of Portrait Painters.

Her Laugher painting was shortlisted for Royal Society of Portrait Painters annual exhibition in London in May 2020 before the exhibition was cancelled due to Covid-19.