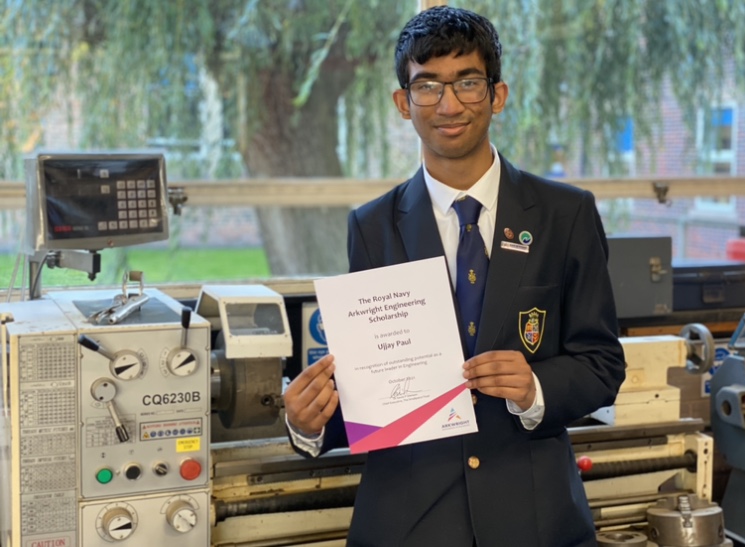 Sixth former Ujjay has won a prestigious national engineering scholarship thanks to his innovate invention, designed to collect plastic waste from waterways

A RIPON Grammar School teenager inspired by his late grandfather is engineering a bright future for himself after winning a prestigious national scholarship.

The 16-year-old, from Leeds, has been presented with an Arkwright Engineering Award for his outstanding potential as a future leader in the field.

The coveted two-year scholarship, which identifies the highest-calibre students in science and technology subjects in the UK, is widely respected in academia and industry and offers opportunities such as work experience, summer schools and a mentor.

As part of the rigorous selection process which began in March, Ujjay took part in interviews and problem-solving tests and delivered a presentation on his pioneering design for a low maintenance plastic waste collection device for use on waterways, called a Tidy Flow.

Sponsored by the Royal Navy, he now aims to pursue a career as a marine engineering officer on submarines.

He told how winning the award, along with £600 prize money, was a tremendous opportunity, opening doors into the world of engineering and bringing him one step closer to his dream career: “Being sponsored by the Royal Navy, with its long and distinguished history and all the adventure it offers, means a huge deal.”

He plans to spend his £600 on engineering taster sessions, trips to engineering museums and to support his A-level studies in maths, further maths, physics and chemistry.

Aiming to study naval and marine engineering at the University of Southampton, where he has attended engineering taster sessions, Ujjay would like to serve on the Royal Navy’s new Astute or future Dreadnought class submarines one day: “I love the idea of going into the world's deepest darkest oceans and seeing all the marine life and the various delicate ecosystems down there.”

A keen environmentalist, Ujjay explained how his innovative Tidy Flow device, which he created using computer-aided design during lockdown, would work: “Tidy Flow can float in inland waterways like canals and rivers and collect surface waste through the power of the water current, so it is like a floating water mill collecting plastic.

“I want to help clear plastics and chemicals away from the rivers and canals before they reach the oceans and seas, where a lot of damage is done. The main advantage is it requires few moving parts, so requires little maintenance.”

*The Arkwright Engineering Scholarship is the most prestigious scholarship of its type in the UK, designed to inspire students to pursue their dreams and change the world as future leaders in engineering.