▶ News ▶ Have we got alumni news for you!

Have we got alumni news for you! 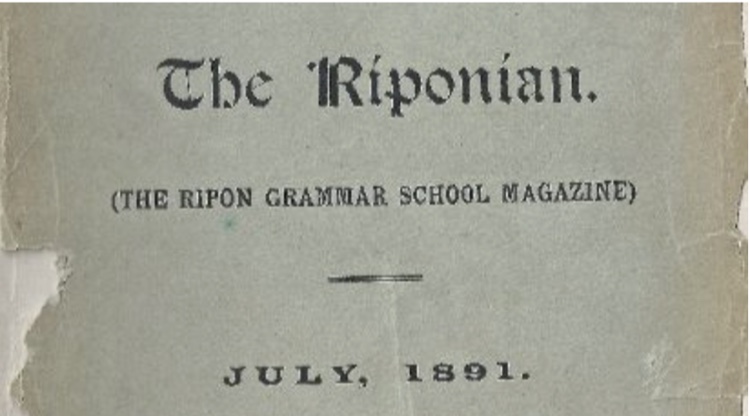 As we mark the beginnings of a new decade with a relaunched digital edition of our Ripon Grammar School alumni magazine, Old Rips president DEREK CROOKES leafs through some early editions of the original school magazine, first published more than 140 years ago 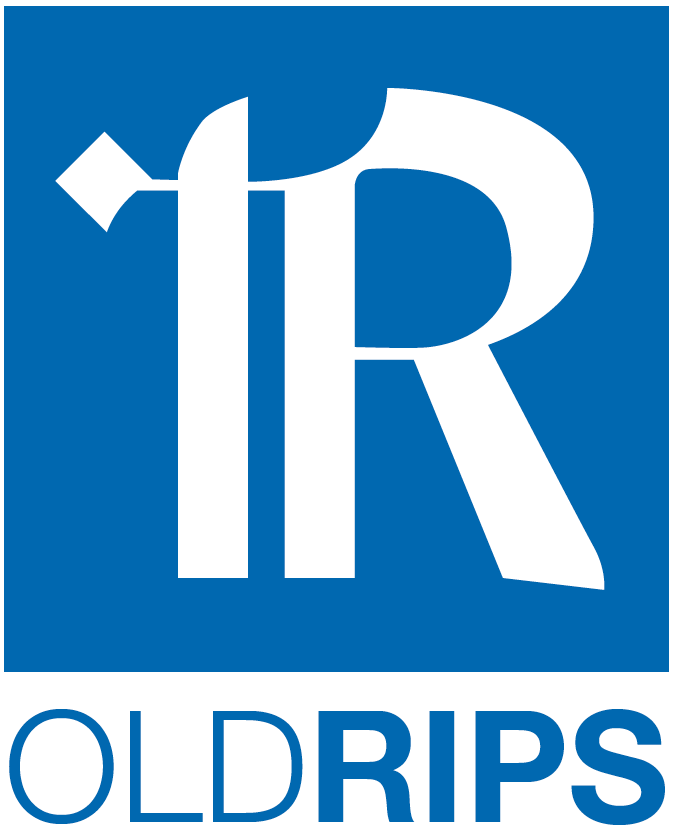 AS a tribute to the rich heritage of Ripon Grammar School, and a reflection of the long history of RGS magazines, the Old Riponians’ Association’s digital relaunch of the school’s alumni magazine is to be called The Riponian.

First published in 1891, The Riponian, the school’s second magazine, emerged during the decade when the school’s alumni association was first established.

When the first Ripon Grammar School Magazine was printed in 1878, its objective was to publish at the close of each term, with news of the school ‘so far as may be interesting to its friends’, supplemented by essays from senior pupils. 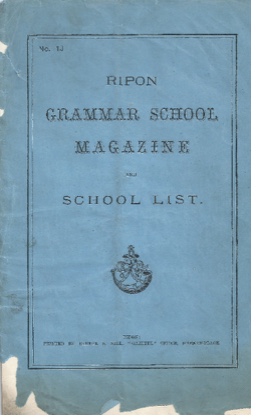 It included a list of names of governors, masters and pupils, together with a report of the prizes and speeches at the school’s first ever speech day, held in the Public Rooms in Skellgate.

RGS’s first cricket and football (rugby) match reports – rather polite and courteous in style - filled the one page of sports news, a feature which was to become increasingly popular and more detailed in decades to come.

EXTRACT - RGS CRICKET CLUB REPORT, 1878:The club is still in its infancy. Much more energy however has been shown during the past season, and under the careful management of the Hon. Secretaries F. N. Butler and J. A. Wiggins there has been some success and much promise of improvement. We have ventured to contend with the club of Thorparch School, much older and much better trained than ourselves, and of course were beaten. But in the second attempt we made a good fight for it, and were very glad to take a lesson from opponents as courteous as they were skilful. With Masham Grammar School the advantage in strength was on our side. We were gratified to find ourselves so much stronger than in former seasons, for we have been beaten by Masham oftener than we quite liked. Our meetings with these old friends are so pleasant that they cannot occur too often.

In addition to the original 1878 edition, we have unearthed two Ripon Grammar School magazines from the 1880s, in our archives, with articles reflecting life in a by-gone age. 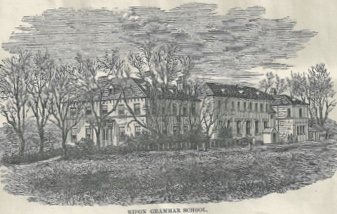 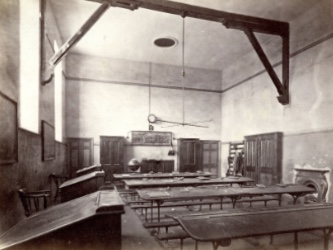 EXTRACT - PAPER CHASE 1881: Wednesday afternoon, February 11th, a number of the boys met in the school playground for a Pape Chase. At 2.30pm C. Askwith and A. H. Tetley set out in the direction of the River Laver near Clotherholme, they twice crossed the river and then entered Clotherholme Woods, where they wandered about for some time laying false traces; then coming out beyond the woods they came to Azerley, and from thence to Sutton; they wandered about the fields, till they saw a road, which proved to be leading to Tanfield, after following the road a short way, the came to North Leys, here they again took to the field, and came out near Straw House, where they took the road and following it till they came opposite the School, crossedthe fields and arrived at their destination at 5.30 pm, after running a distance of 16 miles and never been caught by their pursuers. 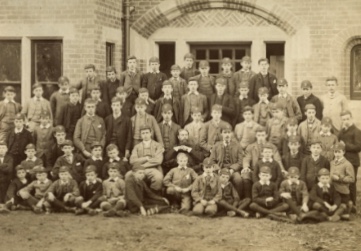 Students outside the new school buildings, 1889 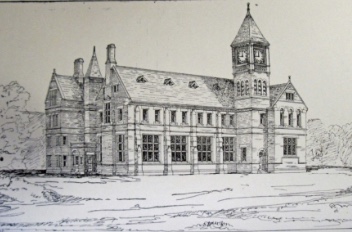 July 1891 saw the re-launch of the school magazine, now named The Riponian. From a single page in the 1878 edition, sport in this decade makes up the majority of the magazine’s content, revealing the breadth of fixtures and including player reviews. 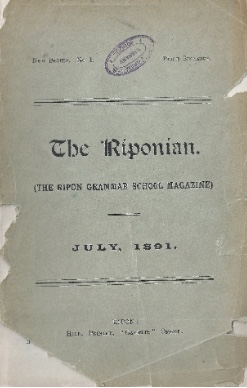 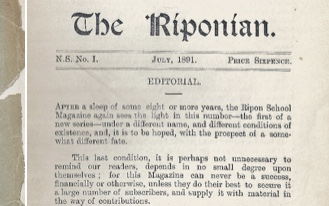 Characters of the Football Team season 1890-91

C. Bland 1890 Captain (10st 11 lb) – Full Back. Kicks and saves well. Has also played half where he marks his opposing half well, but is inclined to be selfish. 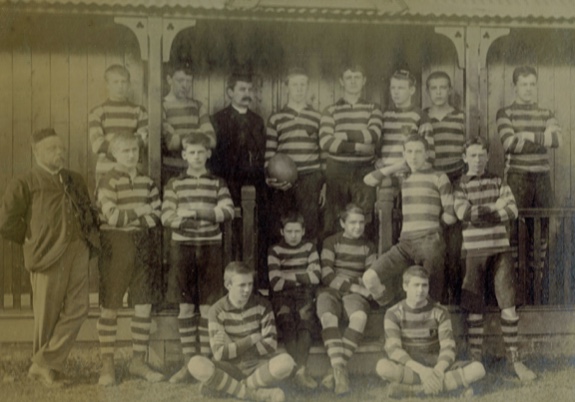 1891 New Cricket Pitch: We have been playing on the new Cricket Ground all this term and find it a great advantage to be able to practise without going to the City ground.

1892 Sports day: The Sports which were held on Saturday April 9th were undoubtedly a success considering that it was our first attempt at holding them on the school ground. The weather was very fine, but there was a strong wind which spoiled our times and distances.

The Band of the 1st WYRV was in attendance and favoured us with a choice selection of music between the events.

1893 Swimming Sports Day: The above were held at the Corporation Pavilion in the River Ure on Tuesday July 18th

1895 First Photo and Adverts published in The Riponian 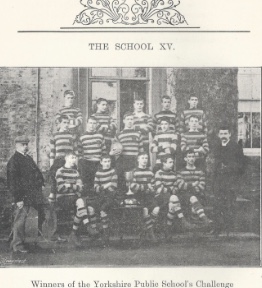 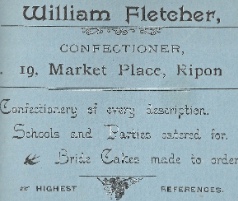 This decade also saw the first mention of a fundraising campaign for School Honours boards, boards listing students’ academic achievements, a tradition which continued through the 20th century. A project to create an Old Boys’ Club, later known as the Old Riponians, also got off the ground during this period.

1895 School Honours Boards: Mrs Faussett organised an Entertainment at the School in order to raise funds for placing boards on the walls of the Big School to record School Honours. 400 people were present and to quote the Ripon Observer, the play was admirably staged and everything from start to finish went without a hitch.

1896 Old Boys’ Club: We are glad to be able to announce that the project of forming an Old Boys Club is taking shape. A preliminary meeting to discuss the whole question will be held at the school on Monday December 21st after the OldBoys match.

EXTRACTS – from the 1890s Debating Society

Motor Cars: The principal argument against these cars was that the horses which we now own would have to be got rid of.

Education: The subject for discussion was: “That a Mathematical education is more useful than a Classical one."

Decimalisation: The subject for discussion was: "That the decimal system of weights, measures and coinage is preferable to that now in use in England." 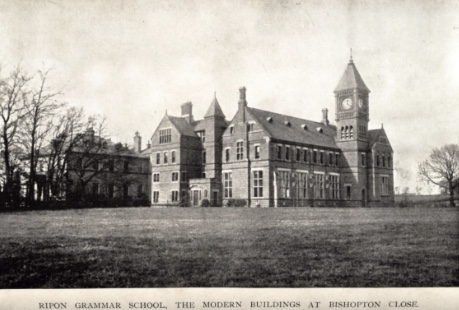 The school buildings in 1897

converting the old Gymnasium into a Physical Laboratory. These alterations and some improvements in the Chemical Laboratory will be completed in the Easter holidays. We understand that Lord Ripon, with his usual generosity in all that affects the welfare of the School, will defray the greater part of the cost.

In 1899, Ripon Grammar School held a concert to raise funds for The Riponian magazine, including a performance of the ‘school song’, Play Up.

1899 School Concert: Saturday, February 11th, a short Concert, in aid of The

Riponian magazine was held in the Big School, at 5 o'clock, and in spite of the early and somewhat inconvenient hour, together with the high price charged for admission (3d.), we were favoured with a very appreciative audience of respectable dimensions.

*Ripon Grammar School’s electronic archive holds the majority of the school magazines, although a few pre-1950s editions are missing. If you could hold any of these missing early editions, please contact Derek Crookes at oldriponians@aol.com