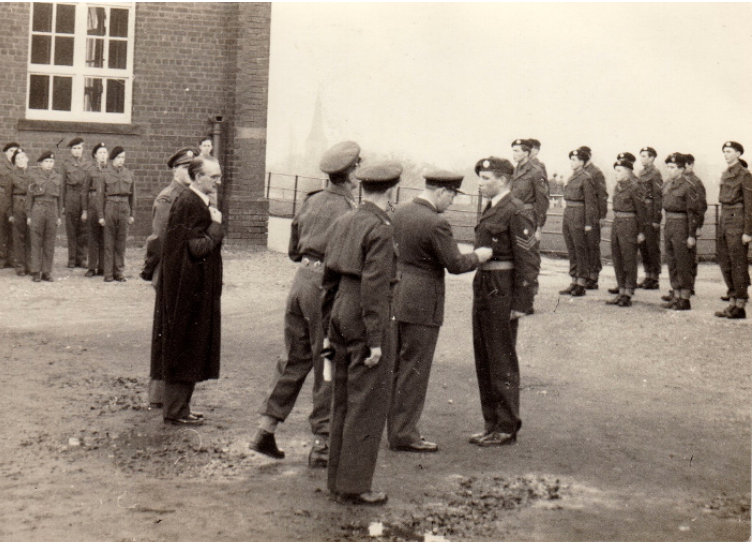 Ripon Grammar School's Air Defence Cadet Corps was the first formed in Yorkshire, just before the outbreak of the Second World War. Boys, whose hopes and dreams were suddenly shattered, signed up, many sadly going on to die in active service. As one boy remarked when a teacher raised the subject of his future: 'Don't worry about that, Sir, I do not expect to be alive two years from now.' This fascinating 1971 Riponian Magazine article looks back on the squadron's proud history

RIPON Grammar School first had cadets in the unsophisticated days of 1938 when the sight and sound of four Heyford bombers leisurely cruising over the school field was sufficient to send the little boys of the prep department scurrying apprehensively to the shelter of their classroom in the Sanny.

No. 81 (Ripon Grammar School) Squadron was the first school squadron of the Air Defence Cadet Corps (ADCC) to be formed in Yorkshire. The ADCC, a civilian organisation with official backing and approval, was formed to fulfil the demand created by the threat of war, for some form of pre-service training.

The uniform was that of the Royal Air Force (tunics buttoned up to the neck) with silver ADG buttons and shoulder flashes. An early photograph shows that the fathers of several present day pupils were members of the original squadron.

In January 1941, the ADCC became the Air Training Corps (ATC) with consequent revision of uniform details, an official status and a renewed sense of urgency. The war situation could hardly have been less promising. Boys at school ceased to contemplate possible careers. They knew that their choice was limited in the immediate future to participation in one of the war services.

Few had any illusions about the possibilities. Many, whose names are inscribed on the scroll that is part of the war memorial in the library, died on active service. Almost the whole of one particular sixth form was lost in tragic fulfilment of one boy's remark when the future was mentioned: "Don’t worry about that, Sir, I do not expect to be alive two years from now".

When the ATC came into being, membership was opened to any boy, whether at school or not, of suitable age. The squadron expanded quickly to four flights with another attached flight at Boroughbridge. Approximately half the boys were from outside school.

Most of the officers were on the school staff but they were joined by members of the Modern School staff and willing specialist helpers from Ripon.

Instructional parades were held on Tuesday and Thursday evenings and there were classes in English, mathematics, signalling, navigation, theory of flight, aircraft recognition and other subjects vital to acquiring the knowledge necessary to become proficient and to enter the Services with the advantage of knowing something of Service matters.Full parades with foot-drill and arms-drill were held every Sunday afternoon often on the Modern School tarmac because there was no suitable parade-ground at RGS.

The squadron's own drum-and-bugle band led impressive church parades to the cathedral or to St. Mary Magdalene's Church and to parades on the Market Square. The immediate target was the attainment of proficiency and later post-proficiency certificates, but the rigours of the more academic studies were leavened by soccer, rugby, cricket, swimming, boxing and athletics, all organised as unit activities as distinct from normal school games.

There were camps, an anniversary tea each February, at least one squadron dance, and sports says. It is probable that the sports day of 1943 was the first meeting in Ripon at which a public address system was used, thanks to the co-operation of the School of Military Engineering. One of the school's present trophies is a permanent reminder of the extent of the squadron's activities. 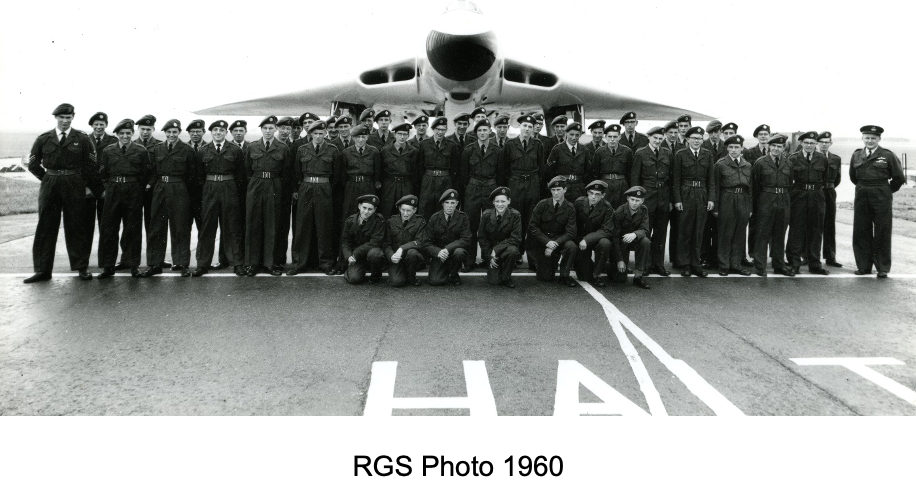 Everyone worked together with the urgency of a purpose to be fulfilled, and dedicated enthusiasm was a characteristic of the squadron throughout the war years. The officers, upon whom the whole of the regular instructional responsibilities fell, spent hours unravelling the mysteries of complicated RAF equipment that often arrived without any accompanying instructions. They had to learn as they were teaching. They attended courses at RAF stations. No-one, cadet or officer, missed a class or a parade if he could possibly attend. Two cadets, cycling in from Baldersby one winter's night, abandoned their bicycles in a huge snowdrift on the way and completed the journey to school and the return journey on foot. Masham was considered to be within easy reach of Ripon without the aid of mechanically propelled vehicles or any form of street lighting.

The squadron was attached to the recently-built RAF station at Dishforth and later to the even newer RAF station at Leeming. War-time contingencies complicated the co-operation with these active-service stations but the cadets did have some flying experience and the commanding officer of Dishforth did make time to visit the squadron to describe how he had led his squadron of Whitley bombers on the first leaflet raid on Italy using the only available map that he had extracted from a school atlas.

The RAF supplied the squadron with the airframe but not the engine, of a Hawker Hart biplane and this stood on the site now occupied by the girls' cloakroom. A Bristol radial engine was housed in a cadet hut (later to become the school canteen and later still to be demolished) that stood approximately where the entrance hall now is. 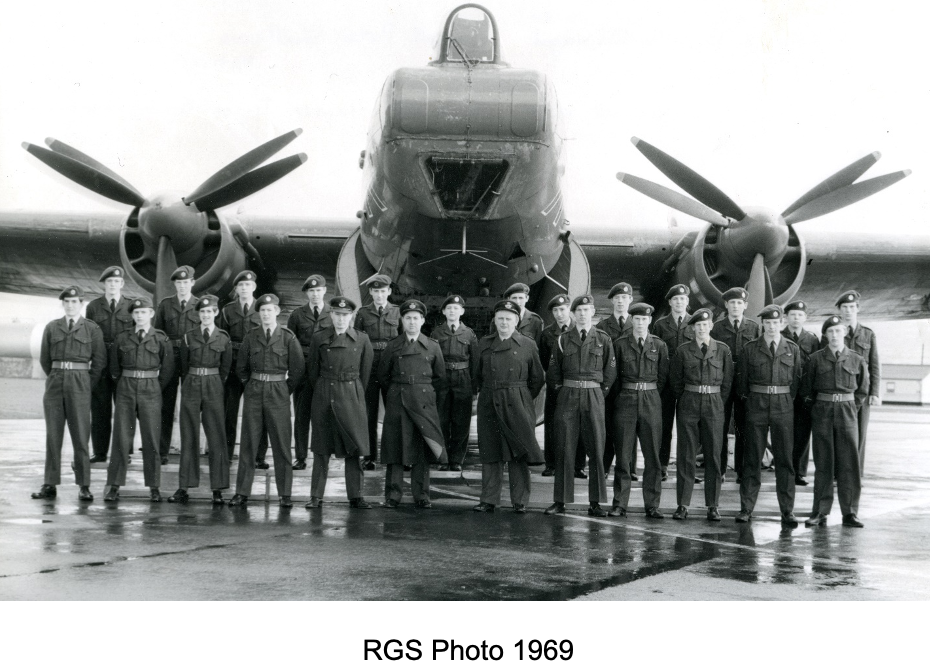 Communication was established with No. 81 Squadron, Hamilton, Ontario, and, although there was little that the two squadrons could do together, the Canadians helped to alleviate some of our war-time deprivations by sending a parcel of sweets, toffees and chocolates to augment individual rations. Reminiscences, revived by perusal of dusty documents, would fill a book. Memories remain of dramatic incidents involving the night-guard at an Addingham camp, of the unloading of an ammunition train, of the pride of everyone in the precision of their drill, the flashing of Aldis lamps, the titled visiting liaison officer who did not realise that chocolate biscuits were rationed and of the valiant efforts of boys unaccustomed to the practice of mathematics making themselves proficient in the use of navigating instruments.

Over-riding all is the sad recollection of the many who went from the squadron to give their lives in the war.

In 1945 when the European conflict ended, it was decreed that proficiency in the ATC was no longer a passport to the Royal Air Force or to the Royal Navy. The purpose and inspiration of the ATC. disappeared. All that was left was the clearing up, the tradition that helped to re-establish the school company as the Combined Cadet Force, and the satisfaction of a service undertaken.